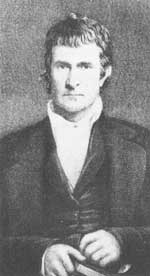 Winans was one of the most prominent early Methodist pastors of Mississippi and preached a number of years in the Louisiana area.

The Louisiana circuit of "Appalousas" was renamed the Attakapas circuit when William Winans was appointed in 1811. Though the circuit was supposed to cover south Louisiana, Rev. Winans (who was from Ohio) probably never ventured further west than New Orleans during this appointment. His income from this position was thirty dollars. Rev. Winans found only three Methodists in New Orleans, which had a population of five thousand at that time. One of these Methodists, a German named Jacob Knobb, gave him a place to stay. Rev. Winans rented a downstairs front room where he taught school and held church services. This was located on Bienville between Chartres and Royal. His efforts at this time yielded few results. He found that the people of Louisiana "were more concerned with amusements and parties." By the year's end, he had fewer than twelve members. In 1812, south Louisiana was divided into two circuits and Rev. Winans was appointed to Mississippi circuits, though some of these still included the Florida parishes area of Louisiana.

He continued to work in eastern Louisiana.  Though he didn't receive an appointment in 1832 (due to ill health) there is still a record that he held the first Protestant sacraments at the courthouse in Thibodaux, LA that year.

Winans works (papers, sermons, letters, etc.) are in the Methodist Archives in the J.B. Cain room at the library of Millsaps College in Jackson, MS.