Caution: VBS ahead – it will change your life

My summers were spent in Vacation Bible School. That’s no exaggeration. My home church, a large Southern Baptist congregation, held its VBS the first week that school was out. It was a great celebration with about 100 – 150 children in attendance. After that VBS concluded, my mother then sent us to every VBS in a ten block radius of the house. I attended Assembly of God, Church of Christ, Methodist (and United Methodist) and other Southern Baptist churches. Easily, I attended six to eight VBS’ each summer. We even had a family friend that would host a home based Vacation Bible school on a week when no one else held one. She put up a tent in her yard, she would invite a missionary couple that she knew and about 30 neighborhood children did all the typical VBS stuff in her front yard. Obviously VBS had a profound impact on my life. 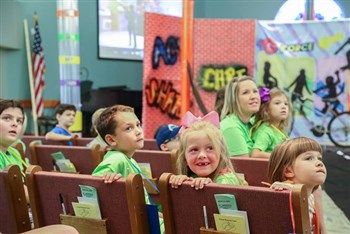 I can remember being in the sanctuary with 100 other children pledging allegiance to the American and Christian flags, as well as the Bible. I can remember Mrs. Watts and some of the fun craft stuff we did. I remember stumping Mrs. Pearson during Bible quiz, because she didn’t know who cursed the fig tree (apparently she needed to spend more time at Bible school). Mr. Webb, who took a week off work, led us in relay games in the playground. . I remember our pastor, Bro. Furr, who seemed very formidable to a kid, sitting on the steps talking with us kids.     I don’t really recall any of the stories we were told, or songs that we were taught, but I do remember there were lots and lots of people that spent time with us.
WOW! After attending between 60 and 80 Vacation Bible schools, my most significant memories are of the people who made room, cleared off their schedule and took time to be with us. That needs to be a valuable lesson to those involved in VBS. Perhaps one of the most significant things we do as a church is the summer adventure of VBS. There are many reasons not to host a VBS. It will be time consuming. It will be labor intensive. It will be exhausting. And it will, in all probability, change your life. If you do it right, it will change the life of the children who attend.
And here is the difficult part – how do you get involved in VBS – you ask if they need help. That’s it. Volunteer to participate in something so very special. Change your life.
For examples of Vacation Bible School resources and curriculum, visit Cokesbury Bookstore at https://www.cokesbury.com/forms/DynamicContent.aspx?id=296&pageid=1152.
CONNECT WITH US