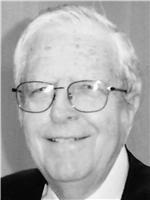 "He has told you, O mortal, what is good; and what does the LORD require of you but to do justice, and to love kindness, and to walk humbly with your God?" Micah 6:8 Born September 8, 1929 in Alexandria, Louisiana, Rev. J. Philip Woodland died at his home in Baton Rouge on December 4, 2015.

Educated in the public schools of East Baton Rouge Parish, he graduated from Baton Rouge High in 1946. He received his B.A. from LSU in 1950, where he was active in the Wesley Foundation. He received his M.Div. from Yale Divinity School in 1953 and was ordained an elder in The Methodist Church.

After serving as the District Superintendent of the Monroe District (1991-97). Phil and Madeline retired to Baton Rouge, where they resided in Southdowns. Many remember his gifts of preaching, teaching, and pastoral care, and for his passionate concern for the church's role in creating a just and loving society. The list of organizations in which he served is long, including Project Equality, the Board of Church and Society, the Board of Global Ministries, and many other bodies of the Louisiana Conference of the United Methodist Church. He served as President of what is now the Interfaith Federation of Baton Rouge, the Baton Rouge Council on Human Relations, and the Children's Coalition of Greater Baton Rouge. As a part of Kids' Hope and VIPS, he volunteered for many years at University Terrace Elementary School. He was a tireless fan of LSU football, the Democratic Party, and the achievements of his children and grandchildren.