The Rev. Jenny Seylar got her first taste of boiled crawfish while serving recently on a disaster response team in the Baton Rouge area.

The team, which included four adults and four youth from First United Methodist Church in Tipton, Iowa, worked on the home of James and Karleen Butler in the Azalea Lakes subdivision. The house took on four feet of water during the catastrophic flooding that engulfed Louisiana last August.

“The Butlers are a delightful, gracious couple. Because James sustained some injuries right after the flood, they definitely needed help. They were so grateful for our assistance that they bought crawfish for our group to introduce us to Louisiana food. The Butlers delighted in teaching our youth on just how to actually eat the crawfish—it made them happy to make the kids happy,” she said.

Rev. Seylar emphasizes that the emotional support supplied by a disaster response team is just as important as the physical support. “For me, being able to be the hands and feet of Jesus is what it is all about. We’re not there just to work on their house. We are there getting to know the people, listening to their stories.”

The Butlers showed the team pictures of their children and photos from their 50th anniversary celebration. “Through it all, we were building relationships, not just a house.”

The team from First UMC in Tipton has served on “a lot of mission trips” and knows well the importance of the role played by a disaster response team. “People like the Butlers have some resources, but they can’t afford to have the work done. They were so grateful for our help, and we are happy that our efforts contributed toward putting them in a better place toward getting back into their home.” 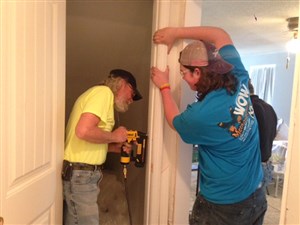 Serving in the Denham Springs area, John Himpel and his team nine from Manchester UMC just outside of St. Louis, Missouri is also a seasoned group. However, Himpel was not prepared for the amount of devastation he saw when first arriving to serve.

“I’ve seen the damage done by flash floods that were a mile wide. But this flooding affected entire communities. The house we’ve been working on is situated between two other flooded homes that have been abandoned by their owners,” said Himpel. “It’s the first time I’ve ever seen a large refuse truck going down a street that said ‘Disaster Refuse Collection’ on its side. The truck goes up and down the street we were working on all day long. There so much devastation.”

Like Seylar, Himpel believes that the most important work accomplished by the team is the building of relationships. “The homeowners are a married couple. The husband has ALS, and he is struggling with that. Throughout the day, caretakers, nurse practitioners and physical therapists come and go. He gets depressed; he didn’t plan for his life to turn out like this,” said Himpel. “For the team, it’s as if the house is almost secondary. I think the most important thing we have given these homeowners is a sense that somebody cares.”

When asked “why” he serves on disaster response teams, Himpel replied, “I’m retired. Throughout my life, when I needed help, others helped me. I just want to pay it forward.”

Because the flood response is so expansive, the Louisiana Annual Conference Disaster Response Team is reaching out and teaming up with community partners to complete the work as quickly and efficiently as possible. “We asked the question, ‘How can we leverage resources to be successful?,’” said Debra T. Davis, Ph.D., Disaster Response Director for the Louisiana Conference.

As a result, the Conference is partnering with Habitat for Humanity in a campaign known as “Windows, Doors and Floors,” where Conference disaster response teams mainly focus on the installation and repairs of those three key household components.

So, the team from St. Louis installed door casings, while a team from Austin, Tex. worked on a sunken floor in a home in Clinton, La. 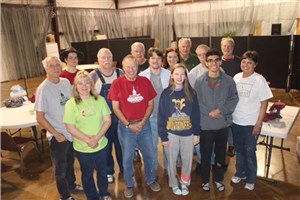 Wally Vog, team leader for the 15-member group from Oak Hill UMC in Austin, has been “really impressed” with the organization of the Disaster Response ministry in the Louisiana Conference. “They do a really good job of identifying the people most in need,” said Vog, whose team is helping a widow with a broken ankle who does not have family support.

“She was really almost tearful that someone was helping her get back into her house,” he added.

The team from Austin was prompted to head to Louisiana after watching news reports on last year’s flooding. “We saw the tremendous devastation. And now that we are here, we see that some places have been fixed, and some have not. There is still much to do.”

Vog’s team has enjoyed meeting the people they are serving. “Louisianians are just fantastic. And the interesting thing is that people were affected in every area. Income lines didn’t matter. It reinforces that people need help all over the place.”

He emphasized that every person has something to give to the recovery effort. “I’ve got resources. It may be just my hands, but I remind myself, I just have to go do it. And I’ve always been blessed by the people we’ve helped. At the end of a mission, I always ask myself, ‘Where can I go next?”

Story by: Betty Backstrom, Communications Liaison for the Louisiana Conference