When the desire to help outweighs everything

Whether you speak to the church secretary, a youth volunteer or the senior pastor, the reaction is all the same, “We just love Ryan!”

It comes as no surprise Ryan Precourt would be hanging around Jefferson United Methodist Church.

As Reverend Michi Head quickly points out, “He’s here every Sunday and he absolutely makes his presence known. After every song, he’s never afraid to scream, Amen!"

Ryan’s passion is just one part of his story.

Life for the 29 year old changed instantly eight years ago when a drunk driver collided head-on with his truck. The crash left him paralyzed and confined to a wheelchair.

“He and his Mom and Dad have just been through so much,” says Rev. Head.

That includes the impact of storms.

The Precourts were living in New Orleans when Hurricane Katrina struck. Determined to avoid another storm, they made the decision to move to Baton Rouge.

11 years later, the storms returned. This time, they couldn’t escape and lost everything as their house was inundated with six feet of flood water.

Nowhere to live, the Precourts have taken up residence in a local hotel and recently found themselves at a breaking point.

With Ryan’s Mom having to return to work and his Dad having to meet with FEMA representatives and contractors, care for Ryan was becoming an issue.

Delivering a “UMC” (A “United Methodist Casserole”), it didn’t take long for him to sense the Precourts urgency.

“As I sat and listened to everything this faithful family was dealing with, I just looked at Ryan and I asked him, ‘would you like to come to Jefferson and help us hand out supplies?’ His face just lit up!” 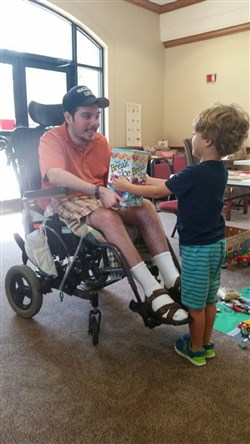 Since then, Ryan has been at the church eagerly sorting and handing out supplies to residents of south Louisiana who, just like him, have lost everything.

“Whenever I have needed help, I’ve asked for it and I’ve received it.” said Ryan. “So now is my chance to do the same. It’s my chance to help my brothers and sisters. So when you ask me why, it’s a no brainer!”

Rev. Head says while no one is surprised Ryan is volunteering, it is still remarkable considering yet another curve ball in the young man’s life. “It just touches your heart.” Head says through tears. “They have just been through so much.”

Between each question, Ryan would gently hum songs of hope and inspiration.

From ‘Amazing Grace’ to “Don’t Worry, Be Happy’, his entire ethos was focused on remaining positive.

Ryan knows there are hurting people right now, yet he is quick to share the good news of grace.

“God is good. He’s always good.” he says with a smile. “He’s always been good to me and I know his goodness will continue. God will take care of me and everyone.”

Rev. Head is thankful for Ryan’s volunteerism but he’s equally thrilled to have a partner in ministry.

“You know, he’s just amazing! He will sit there and greet everyone with a huge smile and the best part? He’s not afraid to share words of faith with everyone who arrives. Of course, we knew that would happen because he has that same spirit for us every Sunday!”