Bryan G. Sibley, MD, is a pediatrician in Lafayette, La. and has been an active member of Asbury United Methodist Church in the same city for more than 20 years. Married to Shelley Rosson Sibley, the couple has three children--Lauren, Garrett and Blair.

This already busy husband, father and doctor was about to get even busier when in the beginning of 2000, Dr. Sibley scheduled a 15-minute visit with the Rev. Ed Boyd, who was the senior pastor of Asbury UMC at that time. “Our youngest child (and second daughter), Blair, was born on Nov. 13, 1999. I had scheduled the meeting with Ed to discuss three things—the scheduling of Blair’s baptism; raising money for a mission trip; and scheduling a Sunday service on which my mission group could speak at all four of our church’s worship services.”

Little did Bryan realize that Rev. Boyd was about to send his congregant’s life on an unexpected trajectory. “ I arrived in Ed’s office at the appointed time, and in short order, he answered the questions I had for him. After that, he was gracious enough to ask me about who I was.”

That fateful question was the turning point for the “15-minute appointment,” which became a 90-minute lesson on “my life, background, hopes, dreams plans, and opinions on the topics of our day,” said Bryan. “I digressed into how hard I was working at my job--on most days, more than 20 hours each day—in an effort to build my medical practice, all for the greater good of my family. I am sure Ed had a full calendar and more than a few other items on his agenda that day. However, even if for no other reason than because he is a wonderful man, he sat for a solid hour and listened to my ramblings.”

According to Bryan, once he paused to take a breath, Rev. Boyd look him “squarely in the eyes” and said, “God first, family second, everything else third.”

Bryan took Ed’s advice to heart. Since that meeting, much has happened in his life.

Bryan attended Louisiana Cursillo #142 in January of 2012 and later that year, began a three-year journey toward becoming a Certified Lay Minister in the Louisiana Conference of the United Methodist Church. During that time, he served Port Barre UMC as a supply pastor, leading worship and preaching two Sundays each month. “I also had the opportunity to preach at several other churches in the conference, taught at the Louisiana Conference License to Preach School, spoke during Asbury’s Lenten Lunches and other Asbury events, and at events throughout the Acadiana District,” said Bryan. He was commissioned by Bishop Cynthia Fierro Harvey as a Certified Lay Minister (CLM) on June 8, 2015 during the Louisiana Annual Conference in Shreveport. 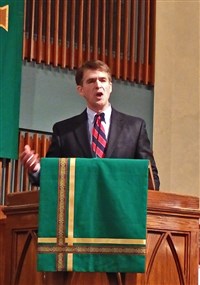 As a CLM, Dr. Sibley recently launched “Living Generously,” a “ministry of stewardship and generosity” at Asbury. He serves as the Acadiana District Finance Chairperson and has served his church as Lay Leader, Lay Delegate to the Louisiana Annual Conference, liturgist, usher, adult and high school Sunday school teacher and as a member of medical mission teams to Mexico and Peru. Bryan is a member of the Congregational Worship Committee, the Finance Committee and the Staff Parish Relations Committee.

In addition, Bryan and Shelley recently co-chaired the “Generations” campaign, which was successful in significantly reducing Asbury’s longstanding debt of over $3 million.

Despite his deep commitment to church work, Bryan was able to carve out the time to write a book, which is entitled God First—Setting Life’s Priorities. The book was published in October of 2016 and has sold more than 2,500 copies.

“In the book, I attempt to share insights about the lessons I’ve learned throughout my journey of faith,” said Bryan. God First presents a “very personal narrative” which focuses on the “principles for living the life God has in store for everyone.”

Each of the book’s 10 chapters is devoted to a different aspect of life as a Christian. These are illustrated through a combination of scripture and Dr. Sibley’s stories.

“I never really knew what the outcome of this book would be,” said Dr. Sibley. “Would people buy it? Would they read it? Would they care? Since the book was published, it seems like four to five times every week, I receive a note or a call or a message from someone who tells me how much the God First message meant to them.”

Several weeks ago, Bryan received this email message from a reader: “Thank you so much for writing your beautifully touching book! It is helping touch lives and souls; And it especially means so much to me. You see, my husband was recently diagnosed with terminal cancer. He has never been a spiritual man...but your book really touched his soul and brought him to Christ. This is the very beginning of what I hope to be a beautiful witness and your book has opened that door! Thank you, thank you!”

“I replied by offering to pray for her husband, by expressing my gratitude for her kind comments, and by reminding her that this was never really about me, but rather it’s about the way the Lord communicated to her husband,” said Bryan.

He added, “This book would likely have not been written, the impact it’s had on peoples’ lives would not have occurred, none of this would have happened if it had not been for a very busy minister who lived into being the best version of the person God created him to be by taking the time to listen to me talk for 90 minutes--then whisper seven simple words, “God First, family second, everything else third.”

To obtain signed copies of the book, as well as book study guides visit www.godfirstthebook.com. Both hard copies and digital copies are available at  www.amazon.com.

Story by Betty Backstrom, Communication Liaison for the Louisiana Conference
CONNECT WITH US