"Together, We Are Stronger"

Bishop Cynthia Fierro Harvey
On this, the 11th anniversary of Hurricane Katrina, I am reminded once again of the resilience of the people of Louisiana.

For many, these past two weeks have felt like a repeat of Katrina – the water, the mud, the smell, the traffic!

We are also reminded of the love of neighbor helping neighbor, stranger reaching out to stranger. These events, as awful as they are, seem to bring out the goodness in people.

I have spoken to several people who have lost everything a second time.

They describe themselves as “two stripers” and do so with pride in their voice but a deep sadness in their eyes.

How does one recover yet again?

Just yesterday, a friend shared that he doesn't know how people make it through times like these without the church.  I have asked myself the same question several times over the past two weeks.

At a time when our beloved United Methodist Church seems to be so fragile, I have been reminded time and time again of the gift we have, as a Connection.

The word “Connection” means more to most United Methodists than the Webster’s definition.

We speak of being a “connectional” church as we would the Body of Christ.

We are all part of another.

“The hand cannot say to the foot, I have no need for you.”

The fragility of our Connection has been palpable over the last several years and certainly months but in the last two weeks, I cannot imagine living outside the United Methodist Connection.

As fragile as it is, as broken and dysfunctional as it might be - just like many families - I don’t want to live without them.

Louisiana is in full disaster response mode yet again but what we know is that because of faithful United Methodists - conservative, liberal, orthodox, progressive, white, black, gay, straight, Hispanic, Latino, - we were able to get through it 11 years ago after Katrina and we will get through it again - together.

I shared with a friend last week that, “we will never be the same but I honestly believe we will be better.” 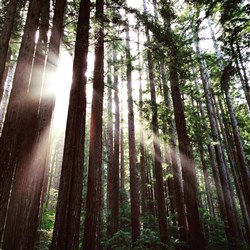 We will be better people,
better neighbors,
better citizens,
better friends,
better because we know what it means to be connected in significant ways.

At Annual Conference in June, I spoke of Redwoods and their ability to stand through millennia.

They typically grow very close together and more importantly, their root systems, while not deep, are entangled in ways which allow them to stand tall for a very long time.

Today, I am convinced (more than ever) that we will remain strong, standing tall and close together in the midst of waters and winds because we are entangled in one another’s lives and we will not let go.

We are stronger than any storm!

Grace and Peace,
Bishop Cynthia Fierro Harvey
CONNECT WITH US