"We Need to Do Something!"

It was October of 2018, and Hurricane Michael was striking Panama City, FL. The category five storm would kill 16 people and cause over $25 billion in damages, including First United Methodist Church, Panama City. The church suffered structural damage throughout the entire campus.

Today repairs at FUMC Panama City continue. In fact, the church's sanctuary is still not open.

"It was just reminiscent of what Michael did on its approach in 2018," Pridgeon, the senior minister at First United Methodist Church of Panama City, says. "I really think the storm triggered emotions for members and residents here and there was an immediate sense of 'we need to do something!'"

Pridgeon would soon meet with leaders across the church to put together a very specific list of immediate needs. They would couple that with a Facebook video asking people to respond. They did. So much so that First United Methodist Church of Panama City soon had a 20-foot truck filled with everything from tarps and work gloves to diapers and baby food.

On Tuesday morning, Pridgeon and Frank Wright, the director of student ministries, left for Louisiana. They were initially headed to Lafayette to drop off the supplies at Asbury United Methodist Church, serving as a distribution hub for Lake Charles.

However, 365 miles into their journey, they realized they'd never get to Lafayette. A tanker truck carrying dangerous chemicals overturned just west of Baton Rouge on I-10, and the closure caused massive backups.

Pridgeon and Wright called Rev. Katie McKay Simpson at University United Methodist Church Baton Rouge, who had previously served in Lake Charles to ask if the church could help store and deliver the supplies.

Simpson knew there was no question of what the answer should be. "Being a pastor that just recently served in southwest Louisiana, it felt so gratifying to be able to play a small part in transferring blessings to friends west of us that are in such desperate need of help," Simpson says. "I know our church felt proud where it is so easy to feel helpless or paralyzed in discerning how to make a difference. Many times, you don't have to create opportunities. God brings opportunities to the right people in the right places at just the right time."

"We hear a lot about the United Methodist' connection'," says Pridgeon. "This experience was another example of the connection at its best. The United Methodist Church, in our structure, creates a 'web of relationships' that enable us to do things that other groups cannot. This is especially true in times of crisis because we can quickly organize and respond."

"In a time where some believe that the connection is broken, it's encounters like this that help us all remember that this rich heritage we share is still very much alive," says Simpson. "It has been said that crisis does not change us, but reveals what is already present within. Our connection can be so fruitful if we allow it to be."

Pridgeon says the 12-hour trip has given First United Methodist Church of Panama City a glimpse into the future, where 'receiving' has turned into 'giving.'

"I believe it was a significant step for our congregation and community," Pridgeon says. "This was a chance to give back. It was an opportunity to reflect and know that we're finding our footing, such that we are able to move from needing to receive help as we did for a long time in 2018 and 2019, to be able to help others who are faced with what our area dealt with almost two years ago."

Pridgeon says the road to recovery will be long in southwest Louisiana.

"But I know that if they draw on the strength of their community, faith in Christ, and the support of brothers and sisters from other areas, they too will make it," he says. "We were glad to be able to help and are making plans to continue to do so as the recovery progresses." 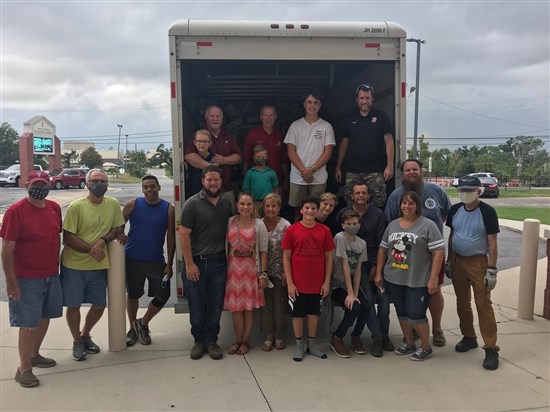