It didn't take long for Rev. Bob Deich, Louisiana Conference Disaster Response Coordinator, to do what he always does, drive to an area impacted by a storm and help provide a caring, Christian presence.

In Farmerville, twelve people were injured, and a neighborhood was destroyed. That is the area where Rev. Bob Deich found himself this morning. 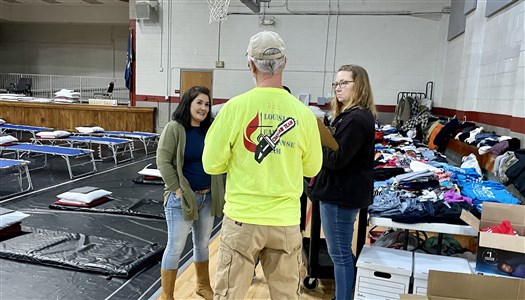 "I've been driving the perimeter of the strike zone and doing what we call 'windshield survey work.'", said Deich. "I was able to hook in with some of the members of the United Methodist Church here in Farmerville, and they showed me an area of intense damage as is typical for tornadoes."

While surveying the damage with some local law enforcement officials, Deich says a young man who was shaken by the loss, especially ten days prior to Christmas, approached him.

"It was tough. The Sheriff's deputies would not allow the young man to walk down to his home for safety and security reasons, but you could see that the loss shook him," Deich remembers. "It's striking to see Christmas decorations in yards on one side of the street and absolute devastation at the neighbors right across the street. Storms don't respect boundaries, and they most certainly don't know holidays."

As much as Early Response Teams in Louisiana are known for the work of their hands with tasks ranging from debris clean-up to chainsaw work, sometimes it's their ears that are needed more than ever.

"We say it all the time, 'Listen, Listen, Love, Love'. The most important thing is to listen to the person's story, look into their eyes as they talk, and not focus on the devastation", he said, "Instead, we focus on the heart." 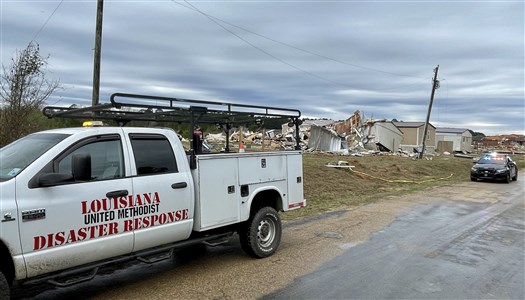 Deich said he received calls and emails from all across the Louisiana conference last night and this morning. He said he even received phone calls from other conference disaster coordinators, all of whom were reaching out to see how they might be able to respond. Deich says it's the power of the United Methodist connection.

"It just reinforced to me that we may be stretched, and we may be pulled in many directions right now and perhaps even really stressed about many things," Deich said. "But the bonds of love and the connection hold strong, and they will prevail. These externals that are surrounding us right now and screaming for our attention will not hold. It's about love, a love of God, and a love of neighbor."

"I am always grateful for the leadership of Bob Deich and the Early Response Team for springing into action following disasters," Bishop Cynthia Fierro Harvey said Wednesday afternoon. "Last night’s and today’s storms are the most recent example. By daybreak, Rev. Deich was on the scene in Farmerville and had made contact with pastors in the surrounding area."

One of those pastors Deich made contact with was Rev. Hank Hamilton, who serves as pastor at Farmerville United Methodist Church.

Bishop Harvey was quick to mention the care Hamilton gave to the community. "Rev. Hamilton had spent the evening and wee hours of the morning checking on church members and persons in the community impacted by the tornadoes," she said. "We have had a great deal of disaster experience, and it is in our nature to check on our neighbors; for this, I give thanks."

Weather forecasters say there is a potential for a strong winter storm next week, just before Christmas. It will likely be preceded by the same phenomena this week - warm, moist air from the Gulf colliding with the front.

"This is a difficult time of the year for any form of any disaster," Bishop Harvey said. "I pray that there will be glimpses of the season, remembering that 'the light shines in the darkness and the darkness cannot overcome it.' (John 1:5)"