St. Luke's UMC 'hangs on tight' in wake of flooding

“Alright, resurrection people. We’re getting ready to worship God in a funeral home,” said the Rev. Ginny Allen, pastor of St. Luke’s United Methodist Church in Baton Rouge. Members of the suburban Baton Rouge church were gathered Sunday morning in the chapel of the city’s Rabenhorst East Funeral Home because St. Luke’s sanctuary took on 28 inches of water during historic floods that struck the capital area just over a week ago.

Allen, whose home was flooded with six inches of water, said to her displaced congregation, “It’s so therapeutic to look into each other’s eyes and to embrace one another. God has provided us this beautiful space with stained glass windows in which to worship. St. Luke’s sanctuary may be destroyed, but we are not,” said Rev. Allen, pictured above with the Rev. Van Stinson, assistant to Bishop Cynthia Fierro Harvey.

The emotional service was a time of worship, tears and sharing of stories that were heartbreaking, and often times, horrific. 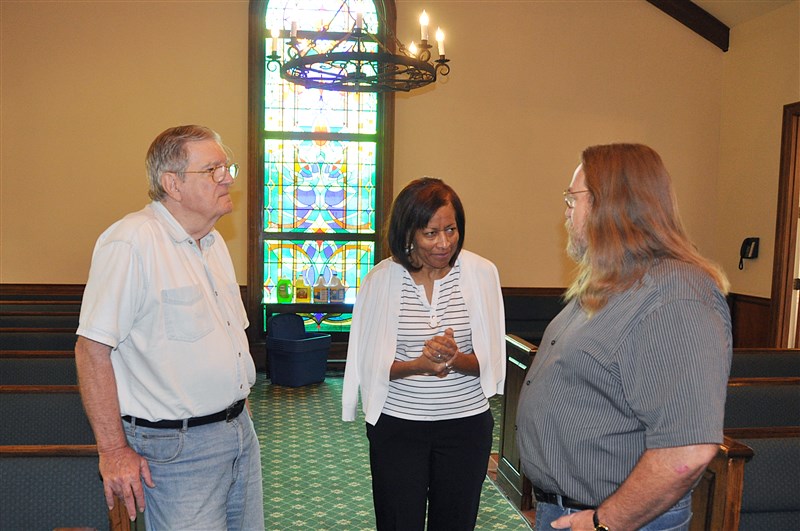 Walda, a member of St. Luke’s UMC, pictured above, shared that she continually felt God’s presence during a dramatic evacuation from her flooding home. “God placed so many people in my path”, said Walda, who initially contacted Rev. Allen as the waters began to rise toward her house. The pastor picked up Walda and moved her to her own home, but unfortunately, the streets soon began to flood in Allen’s neighborhood. Quickly, Walda had to evacuate again, this time with Ginny to the pastor’s daughter’s home.

“As we were fleeing my neighborhood, ‘angels’ of God in rescue boats picked us up,” said Allen, expressing gratitude for the volunteers in a fishing boat that rescued her group. “It’s difficult to describe the feelings you have as you are traveling by boat in five feet of water down your neighborhood streets. The water was rushing and powerful, knocking down street signs and lamps.”

Percy, another member of St. Luke’s, was rescued by boat along with his wife Wanda as their home began to take on water. The two were taken to three different places, and ultimately wound up in a large shelter housed in the RiverCenter, located in downtown Baton Rouge. Loved ones had no idea of Percy and Wanda’s location, but another evacuee at the shelter loaned them a phone so they could contact friends and get a ride to a safe place. “I thank God for all of the volunteers, all along the way that got us safely to shelter,” said Percy, who added that evacuees quickly made friends and “family” while in those shelters.

“There are so many examples of how we all experienced Jesus through the things that were done for us by other people,” said Rev. Allen.

The list of members who had suffered damages and personal loss from the August floods was overwhelming.

The Cavalier family, who live in the Park Forest area, lost their home. “Every house  in that neighborhood has eight feet of debris piled in the front yard,” said Allen.

Susan Fulkerson is mucking out her flooded home with the aid of her sister; both women are in their 60’s.

One endangered church member was able to reach Rev. Allen by phone,  saying, “The water is up to my waist and I’m scared.” Fortunately, the frightened woman was soon rescued and transported to the RiverCenter shelter.

Sometimes, it seems that tragedy follows tragedy in circumstances such as these. Church member, Ronnie, shared that his grand-nephew was killed in a tragic car accident shortly following the flood. A group of young people were coming home from McDonald’s when the car crashed, and all but one of the passengers were killed.

Cheryl Bennett had attended the funeral of her sister only three weeks ago. “Actually, the service was held in this very funeral home,” Bennett said as she stood in the chapel. Yet, despite some health issues, Cheryl  continues to help her fellow church members who have lost so much in the flooding.

There are those church members whose homes did not flood and who haven’t suffered losses who are faithfully serving those in need. Eric and Karen Lessard, who live across the Mississippi River in the city of Port Allen, are housing flood evacuues in their West Baton Rouge home. “It’s crowded over there, with seven people, seven dogs and one guinea pig,” said Rev. Allen.

Another member, who is sheltering Rev. Renee Deaton, pastor of Mangum Chapel UMC in Walker, expressed feelings of “survivor’s guilt” for not having experienced flooding in her own home. Rev. Allen reassured her, saying, "You are doing something so important by providing shelter. You are serving as the hands and feet of Christ and ministering where you are. Remember, guilt doesn’t come from God, so feel free to let go of that emotion.”

Rev. Allen expressed that she has been inspired and uplifted by the deep faith shown by her congregation in the midst of this tragedy. When Walda went back to her home for the first time, Allen was with her. “Of course, Walda broke down at the sight of the damage. But through it all, this woman of faith kept saying, ‘This is just stuff. It’s just stuff.’”

During the Sunday morning service, Rev. Allen used an illustration that referenced the fire ant rafts that have frequently surfaced in area flood waters, slowing down relief efforts and causing injury to volunteers. “When water rises to a certain level in their home, fire ants know instinctively that it’s time to leave the nest. So they lock their legs together, floating to safety in a huge clump. They hang on tight, never letting go of each other. That’s what we are doing right now—we’re hanging on tight to one another.”

Looking forward to the church’s immediate future, Rev. Allen mentioned that she considered cancelling the church’s planned Bible study on the topic of grace. A member told her, “Oh no. You can’t cancel. We need it.”

“That member is right,” said Allen. “Because we are living out that grace right now!”