In the wake of flooding that has affected more than 43 of the 64 parishes in the state of Louisiana and a majority of conference districts, Louisiana’s United Methodist churches are serving as the hands and feet of Christ in meeting the needs of those affected by the devastating rains.

In hard hit Ouachita Parish located in the Monroe District, volunteers from Foundry UMC in Sterlington waded through waist-high water this weekend to help salvage treasured belongings of neighbors whose homes had flooded. One grateful recipient of Foundry’s help posted on Facebook, “This group showed up at my sister’s house today to help get anything and everything out of their flooded home! They never complained and only asked what more they could do. I can't tell you how much my family has appreciated the help you gave. Thank you.” 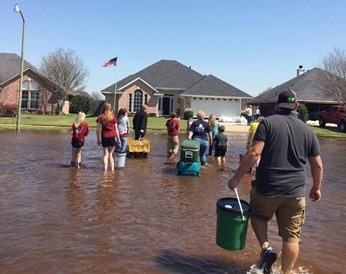 After Sunday’s worship service, a multi-generational group from Asbury UMC in Bossier City assembled bag lunches and delivered the meals along with cleaning buckets to community members impacted by flooding. Asbury UMC is located in the Shreveport District in Bossier City, one of the most affected areas as a result of the flooding. “We are poised to do recovery work as needed. I’ve been receiving many calls from folks saying ‘I’ve got a trailer,’ ‘I’ve got a truck’. Or one even said, ‘I’ve got a football team that can volunteer.’ Everyone wants to help their neighbors,” said Rev. Ramonalynn Bethley, pastor of Asbury UMC.

Gathering for services this past Sunday was a challenge for many congregations. Due to a power outage in the sanctuary, The Well UMC in Ponchatoula held Sunday worship in the church parsonage and streamed the service through a Ustream channel. “The church is without power this morning, but not without power, know what I mean?,” posted Rev. Matt Rawle, pastor.

In the Baton Rouge District, First UMC in Denham Springs opened Friday as a Red Cross shelter. Although only a handful of people are currently housed, the church has the capacity to hold almost 100 evacuees. “Church volunteers have really stepped up, providing a 24 hour presence in case folks arrive and to assist our guests with the Red Cross. Folks have been bringing in food and other supplies,” said Rev. Jaqueline King, pastor. 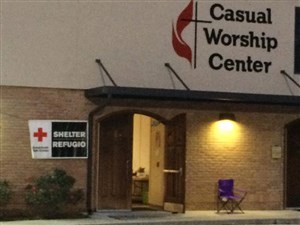 In 2007, First UMC rallied from a disaster of its own. That year, the church suffered a devastating fire that destroyed its education building and severely damaged the sanctuary. “The community was so supportive of us. First Baptist Church allowed us to use their sanctuary for an entire year while we recovered. When we rebuilt, we designed the building with the idea of serving as a Red Cross shelter if there was anyone in need. We are so thankful for kindnesses shown to us, and are willing to step in and serve in any way we can,” said Rev. King.

St. Andrew’s United Methodist Church in Sterlington is also serving as a shelter for evacuees. Rev. Richard Turnley, pastor of the Monroe District congregation, said, “God is providing food, water and other needs through the hands of the people of St. Andrew’s. There is a constant flow of church volunteers coming in and out all day, checking on people, helping as they can.”

Although the church is now on standby as a shelter, the Elizabeth Sullivan Memorial UMC in Bogalusa has housed close to 40 evacuees in the church gymnasium, thus far. Rev. Bill Moon, pastor of the New Orleans District church, reported that evacuees were forced out of their homes “in one way or another.” “Some will have minor damage, some will lose their homes, and some cannot access their homes because their property is flooded. There were already reports of three to four feet of water in houses. In some instances, their car was submerged. In any case, these evacuees would have been isolated.”

Also now on standby, First UMC in Minden provided shelter to more than a dozen evacuees last week that were desperately neededing a place to lay their heads. “Essentially, they were bottlenecked. I-20 at Highway 80 was closed. Every time they tried another road, they discovered it was closed. Many drove in circles for an hour and a half with no place to seek shelter,” said Jeff McBride, communications director for the church.

In the Monroe District, Nolley UMC in Jena is on standby to serve as a shelter. 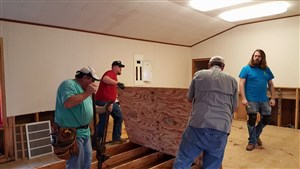 Louisiana Conference churches that have been affected by the flooding include Reveille UMC in Monroe, Wesley Chapel UMC in Ponchatoula, Lees Landing UMC and Crew Lake UMC in Start. Churches are reaching out to churches to help. Members of First United Methodist Church in Winnsboro sent a crew over this weekend to help Crew Lake UMC start clean up and demolition after the church took on more than a foot of water in their sanctuary.

In  a press release issued by Bishop Cynthia Fierro Harvey, she stated that the Louisiana Conference Disaster Response team is “doing its best to respond to the needs and requests.” United Methodist Committee on Relief has issued an initial $10,000 emergency grant to the conference, and conference leaders are “working closely with UMCOR to distribute needed supplies, assess damage and determine the next steps in what will be a long term recovery effort.” 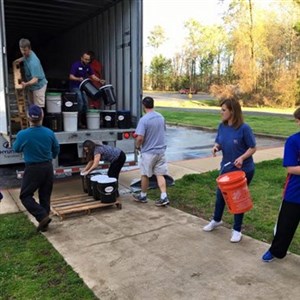 Shipments totaling nearly 4,000 cleaning buckets and more than 4,000 health kits have made their way from the UMCOR Sager Brown Depot in Baldwin to destinations in the northern part of the Louisiana Conference. Today, an additional 3,300 buckets and 3,700 health kits will leave the depot heading north toward Monroe and also toward the Northshore area. Local churches have received and are distributing the supplies, often in partnership with local authorities.

Several pastors serving the conference had to evacuate their own homes. But in true “Louisiana style,” people stepped up to help one another through the difficult process of

leaving their property
and trying to salvage what possessions they could. One evacuee, Rev. Ben McGehee who pastors Lea Joyner Memorial UMC in Monroe, wrote this on his Facebook page: “Some things I’m thankful for today. 1. Friends like Chad Brooks and Tim Neustifter and Michael Johns and Cymantha Lee who will wade into floodwaters to help me rescue things from my house, like my cat, my car, and even the meat in my freezer. 2. That my kids are safe with my Mom. 3. That I have a dry place to sleep and live not far from my house. 4. That my parents bought me some waders for my birthday last year. I thought they were just going to be for duck hunting...”
CONNECT WITH US