Mark Lambert
Camping out with the family in a cozy travel trailer can be fun during vacation.

But, as Brandy Wren can attest, when a hurricane destroys your home, and no one seems able to help you even demo the shell of your rotting house, much less build you a new one, and you’ve lost your job, and you’re trying to hold your life together with your disabled husband and two teenage sons in a “home” where your dining room table doubles as a bed...well, cozy quickly becomes cramped and fun gives way to frustration.

Now, nearly two years after Hurricane Laura exploded her Calcasieu Parish home, Brandy sees hope on the horizon in the form of the Louisiana Conference of the United Methodist Church.

On August 10 on a hot and sticky morning, Brandy met Bill Howell of the Louisiana Conference, Phil Helmuth of Mennonite Disaster Services, and Gid Yoder, an Amish work supervisor from Ohio, to discuss tearing down and rebuilding her home.

The work will start in early November when Yoder and a team of Amish workers take up residence at University United Methodist Church in Lake Charles. 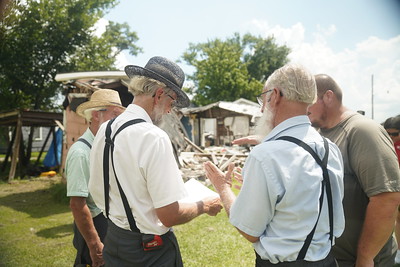 This coalition started with the Louisiana Conference, which provides case management and funding; the Fuller Center Disaster ReBuilders, which supplies building materials and project management; and MDS, the umbrella organization for Amish workers.

Along the way, the coalition picked up more partners, including local Methodist churches, charitable groups, and even other denominations that saw the success the coalition was having in repairing storm-damaged homes throughout the region.

Brandy initially sought hurricane relief assistance through the city of Lake Charles but was passed off to Calcasieu Parish because her home is outside the city limits. She applied to the parish for help, but “at the last minute, they said, ‘We can’t help you because your house is in the city of Westlake.’ I told them, ‘Westlake doesn’t have any program.’ The parish just said they couldn’t help.”

A national, Christian-based charity offered some optimism about a year ago when they said they could help her get the storm-battered house torn down, but that effort stalled when the organization ran short on funds.

“I kind of got shut down at every turn,” Brandy said. But she wouldn’t give up. 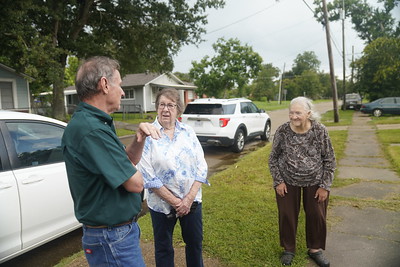 Tim Lafosse, a case manager for the Louisiana Conference, called Brandy and quickly began the process of getting her approved for a total home rebuild.

“I went to her house to take a picture to document the damage,” Tim said. “When I saw the house, it was like, wow! She wasn’t kidding when she said it was destroyed.” 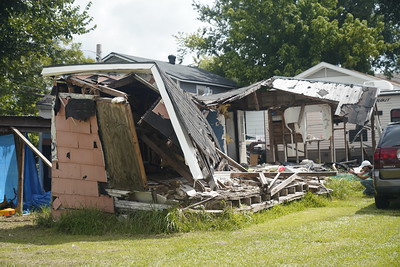 Howell, director of Missional Engagement and Outreach for the Louisiana Conference, said Brandy’s home “is our first priority” among new home builds in November. People like Brandy exemplify the spirit of the people of southwest Louisiana, who maintain a positive outlook in the face of back-to-back hurricanes, a historic freeze, and a devastating flood, all within a nine-month period.

“Despite everything they’ve had thrown at them, there is hope here,” Howell said.

“I’ve seen a lot of faithful people here,” said Yoder, who leads a contingency of Amish workers from Ohio. “They have said to me, ‘We knew God was not going to forsake us.’”

The coalition has done what it said it would do – rebuild homes and rebuild hope in a place that has felt forgotten for nearly two years. Randy Roach, a member of University Methodist’s congregation and a former mayor of Lake Charles, told a recent gathering of coalition members that they were “a ray of light in a very dark time of this community.

“I know that you know what you do for the family members you’re working for is important,” Roach said. “But more so, what you do for the community has even greater importance because it gives hope. What you’re doing is you’re restoring hope, and you’re making God very real for a lot of people.”

If you would like to be part of making God real for people in need in Louisiana, please consider giving at www.la-umc.org/relief
CONNECT WITH US