Hold Up Your Corner

When civil unrest broke out in Ferguson, Missouri following the shooting death of 18-year old Michael Brown, the city would erupt into civil unrest as protesters clashed with police.

Almost immediately, Rev. Dr. F. Willis Johnson found himself and his church, Wellspring United Methodist Church, at the center of one of America's most divisive racial matters in decades.

Two years later, in the summer of 2016, Baton Rouge found itself in a similar situation as police officers fatally shot Alton Sterling in the parking lot of a convenience store. The shooting was recorded by cell phone video, shared instantly on social media and led to local protests and national attention. This incident was followed by the ambush of six police officers by a lone gunman who was shot and killed.

Leaders in Baton Rouge would only have to look to the connectional system of the United Methodist Church as they would invite Rev. Dr. F. Willis Johnson to Broadmoor United Methodist Church for an afternoon of roundtable discussions with his book Holding Up Your Corner: Talking About Race in Your Community serving as a backdrop. 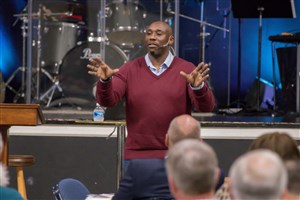 Johnson was quick to point out that the issue of racial justice in America would not be solved in one Saturday afternoon. "When you try to look at things from a geopolitical and global scale, it is cumbersome. We don't have the energy to manage it from that perspective," he said. "But to borrow an analogy from boxing, we need to fight in our right weight class. All things political and economic happen on Main Street, just outside our front doors. We need to put our arms around someone and something."

"I am appreciative of Dr. Johnson's prophetic voice as we face challenges of racial justice in our nation, state and cities," said Bishop Harvey. "And I celebrate that so many people were willing to engage in conversation that has the possibility for transformational change."

One of those participants was newly elected Mayor-President Sharon Weston Broome who was pleased with the large turnout.

"I'm here for a number of reasons as I am interested in hearing from Rev. Johnson, but I am also here to learn and grow myself," she said. "As I sit here and scan the room, I am so happy to see so many people here that have a genuine concern about closing racial gaps that exist. I am confident it will be energy such as this that will give us a great foundation to build upon." 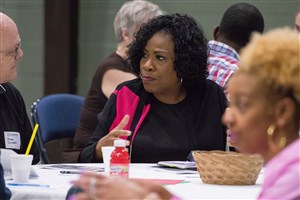 Bishop Harvey expressed gratefulness to the Mayor for engaging in conversation and staying present for the entire event.

"She has many responsibilities and has been pushed and pulled in many directions during her first 20 days in office," Bishop Harvey said. "I will be forever grateful that she made this conversation a priority."

Conversation. It's a word that is often overlooked in today's world of social media postings, Facebook posts, tweets and snapchats but one of the events organizing pastors, Rev. Donnie Wilkinson, is convinced conversation brings about the most meaningful change.

"It is through conversation where we recognize the commonality we share with other people," the Broadmoor United Methodist Church pastor says. "There is a profound tendency in this country to retreat to our tribes and corners where we stay in an echo-chamber, only hearing things that already affirm the way we look at the world. In doing so, we only diminish ourselves. Part of the benefit of events like this is to help raise awareness and to give some real simple tools to engage with one another." 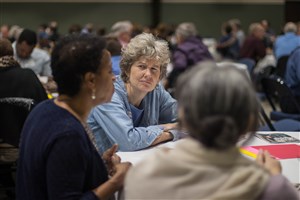 Baton Rouge is still waiting for the results of a U.S. Department of Justice investigation into the fatal shooting of Alton Sterling.

Rev. Johnson's call is for all Louisianians to remain focused.

"Prepare to be who we've been called to be. There is still, and always will be, an imperative to be lived out; to love Christ and to love our neighbor, to do justly, to walk humbly and to love with kindness," he says, "You cannot legislate love and you cannot adjudicate justice but at the same time, we need to acknowledge, affirm and act. We need to see what's not right, lift up the importance of loving others, but then we need to do something. Doing nothing is not an option."