The rain began late Thursday and refused to let up, dumping over 12 inches in as little as 8 hours.

In some locations, rain totals exceeded 15 inches and was tropical in nature as it stalled out over the greater Baton Rouge area.

In fact, local forecasters quickly pointed out; had this system been over open water, it would have likely been classified a Tropical Storm.

Schools, government offices and most local businesses closed and motorists were urged to stay off local roads. However, several area churches were quick to respond including First United Methodist Church in Denham Springs, a church sadly familiar with disasters. 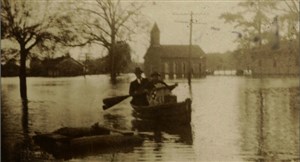 Whether it was flooding to the church in the 1920's, a fire in the 1970's that destroyed the sanctuary or a second fire in 2011 that wiped out the education building and the family life center, First Methodist of Denham Springs has consistently received gracious support and assistance from the community.

"Now, it's our time to pay it forward." says Rev. Jacqueline King. "After the church was rebuilt in 2011, our church quickly did the work to position itself as a disaster relief center as a way to pay it forward. In the fall of 2014, we arranged to become a local Red Cross shelter."

"Some of the church members themselves are dealing with their own flooding issues; either in their subdivisions or homes. Yet, they've risen from those challenges to help." says King. "I couldn't be more proud. It is difficult and challenging but so incredibly rewarding to be the hands and feet of Christ."

While First Methodist Denham Springs stands ready to assist, several other Methodist churches found themselves victims to the flood itself such as Deerford United Methodist in Zachary. 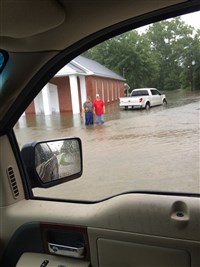 Rev. Susie Thomas says the good folks of Deerford were sandbagging all day Friday. "They have seen this church through high waters before" she said, "It flooded during the large storm of 1983 and everything - pews, altar furnishings - had to be replaced. It's a gem of a church with a dedicated congregation - we will be back!"

Bishop Cynthia Fierro Harvey stands ready to assist, "This will likely require an extended response," she wrote. "I have been in prayer all day for those in our area who are being affected by the rain and rising waters."

Bishop Harvey said she has been in contact with disaster response teams and announced that flood buckets have been requested.

"In the meantime, check on your neighbors, particularly the elderly and continue to pray for our community."

See the complete response from Bishop Harvey below:

I have been in prayer all day for those in our area who are being affected by the rain and rising waters. The next few days will be a challenge for many.

I have been in contact with our Disaster Response team and flood buckets are being requested from the Sager Brown Depot and the team will continue to monitor and respond as they are able.

Several churches in the area are responding as they provide shelter for those forced out of their home. The flood waters are making movement difficult. I beg your patience.

This will likely require an extended response.

In the meantime, check on your neighbors particularly the elderly and please continue to pray for our community.