Partnering with the Greater Baton Rouge Food Bank, Faith Crossing United Methodist Church in Walker sponsors a mobile food pantry one Sunday a month on church grounds. The food ministry has drawn many community neighbors to the church, where friendships have developed between those being served and the congregation.

Beth Lawson, a charter member of Faith Crossing UMC, was serving as the church’s children’s coordinator in the spring of 2014. Through her work, Beth became acquainted with a group of nine elementary school-aged children who lived on Hummingbird Lane, a street near the church. These children were only brought to church on occasion. “I quickly realized we only saw these particular kids on the one Sunday a month that we hosted the Greater Baton Rouge Food Bank,” said Lawson.

After engaging them in conversation, the children “excitedly” told Beth of other kids who lived on Hummingbird Lane that she hadn’t met yet. “When I discovered that an elderly couple from our congregation also lived on the same street, I could not deny my directive to develop a ministry action plan that would reach out to these children.”

After just a brief visit to the house of Bob and Carolyn Dupre, long-time United Methodists, the vision for a ministry action plan on Hummingbird Lane started to take shape. “We carried a conviction that the kids who lived there needed someone to model what it means to be a disciple of Jesus Christ, right in their very own community,” said Lawson.

Through prayer and discernment, it was decided that Beth would begin meeting with the children on Fridays, immediately after they got off the school bus. The group would gather at the home of the Dupres, which just happened to be the school bus stop.

Help came from everywhere, it seemed. The Dupres offered their front porch. Lawson’s father offered his guitar for music. Her seven-year-old daughter offered her Bible. And an old friend showed up at Lawson’s house with $90 that paid for enough five-gallon buckets, colored duct tape and sticks to make drums for all of the kids on Hummingbird Lane. 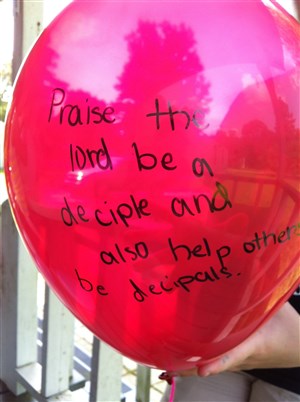 The first gathering was held May 2, 2014. “I was there, waiting for them with ‘high-fives.’ We asked them about the best and hardest parts of their week. Our activities included scripture reading, prayer and making musical instruments with whatever we had. These kids had a genuine interest in the Word of God. Essentially, we created an intentional discipleship community that is similar in many ways to a Wesleyan class meeting,” said Lawson.

Rev. Warren Clifton arrived at Faith Crossing UMC in the summer of 2014 to serve as the congregation’s new pastor. “I was greeted by this group of children who invited me to their Bible study. I had no idea what to expect, but that Friday, I drove to Hummingbird Lane to find a group of children waiting in the road, waving me down to be sure I found the address. I sat in the porch swing and listened to these children read passages from the Sermon on the Mount and watched as they prayed for each other and for their neighbors. We had church!,” said Rev. Clifton.

Rain or shine, the group met. The kids would run toward the Dupres’ property whenever they saw Lawson’s car. When school let out for the summer, the group gathered in the mornings to avoid the afternoon heat. Once fall returned, the schedule returned to after-school meetings. When it turned cold, the group made fires and hot chocolate. “When I had to be out of town to attend seminary, volunteers stepped in to fill my place. Some kids moved away and others moved in. Another spring came and we celebrated Christ’s resurrection with kids who couldn’t even pronounce that word a year before. Regardless of the conditions, the Gospel was consistently brought to Hummingbird Lane in a true Wesleyan and apostolic fashion. Most importantly, the intentional discipleship community was maintained according to its original purpose—to love Jesus and to love like Jesus,” said Lawson.

Rev. Clifton explained that at the time, Lawson was taking her preaching course at Asbury and planning to preach at Faith Crossing UMC. “But we encouraged her to preach in the open air, like Wesley and Whitfield. Beth delivered her sermon to children and adults from Hummingbird Lane as they gathered around a fire and drank coffee and hot chocolate. It was a blessing to see her gifts as a pastor develop as she ministered to these wonderful families,” said Clifton. 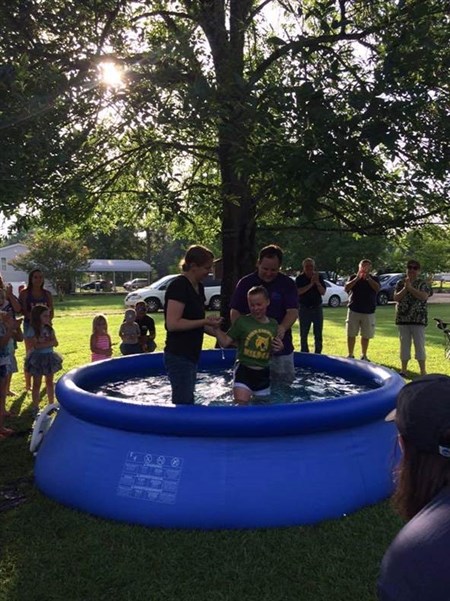 After 13 months of serving the children of Hummingbird Lane as a lay member of Faith Crossing UMC, Lawson was licensed as a local pastor by the Louisiana Annual Conference. “The same week I received that license, I was once again on Hummingbird Lane. A little boy, who had participated in this gathering from the beginning, came to me and told me he wanted to be baptized. I shared in his joy with him, and asked him talk to his parents about it. The very next week, there were five children who wanted to be baptized—and the same little boy was asking to be baptized by me, right there on the street where they live,” said Rev. Lawson, who now serves as associate pastor for St. Andrew’s United Methodist Church in Baton Rouge.

On June 26, 2015, the kids of Hummingbird Lane invited two United Methodist congregations, their entire street and their extended families to come out and witness their baptisms by immersion on the Dupres’ front lawn. During the baptism, the children led the service with a scripture reading and songs. The choice of music allowed them to use the drums they had crafted together. On that day, two children were baptized, one remembered her infant baptism and two committed to being baptized in a church sanctuary. “Both United Methodist congregations pledged to support these new Christians. Many neighbors and family members of the children remembered their baptisms and renewed their faith in Jesus Christ. The kids continue to gather and worship on Hummingbird Lane, spreading Christ’s message by the examples of their lives,” said Lawson.

Beth credits a course she took at Asbury Theological Seminary during the spring of 2014 with providing the inspiration for the Hummingbird Lane ministry. “Dr. Stephen L. Martyn, associate professor of Spiritual Formation at Asbury, led the course on Tradition and Spiritual Formation. The assignment for the course was to develop a ministry action plan that would set forth our application of the worship, discipleship and missional aspects of the early Methodist tradition. By the end of the course, I could see the ultimate goal of ministry is simply helping people to love Jesus and love like Jesus. At the beginning of the course, Dr. Martyn posed one simple question — ‘Who around you is showing genuine interest in the Gospel?’,” said Lawson, who is in awe of how Scripture has inspired the children of Hummingbird Lane.

Faith Crossing UMC’s  ministry on Hummingbird Lane reflects the “vision and preferred future” of the Louisiana Annual Conference of The United Methodist Church by “learning and telling the Gospel story.”

“These kids have already done much to season their own homes and their own street with the Gospel. I know that one day the Lord will send them into the world to make disciples of Jesus Christ. God had the Hummingbird Ministry in place a full year before Dr. Elaine Heath addressed the 2014 Louisiana Annual Conference in Shreveport, but this ministry is exactly the kind of ministry she illustrated as a dandelion thistle,” said Lawson. “Through this experience, I believe that God blesses a strategy that employs four verbs—identify, engage, equip and send. Identify who it is that has a genuine interest in the Word of God. Engage those individuals with the Gospel on a consistent basis. Equip those individuals to lead intentional discipleship communities on their own. And, finally, send them into the world to make disciples of all nations.”
CONNECT WITH US