District Superintendent Rev. Ken Irby had Tuesday, July 19 on the schedule as a follow-up for Baton Rouge clergy to gather and discuss the next steps in the wake of the Alton Sterling shooting. However, in the two weeks since, the city finds itself in the midst of yet another horrific act of violence.

On Sunday, Gavin Long, a former Marine from Kansas City, Missouri, walked down Airline Highway armed with two rifles and a handgun, intent on killing police officers. Two police officers and a sheriff's deputy were killed before Long himself was eventually shot and killed.

As Rev. Irby gathered the flock of pastors, the room was dense with emotion. As each table conversed with one another, some pastors admitted to being angry, some felt overwhelmed, while others are still grieving the deep sense of division and confusion in the community.

Rev. Connie Saizon said she skipped her sermon Sunday and, instead, did something normally unheard of in a Sunday service. “I turned to my congregation and said, ‘We need to talk!,’ and we did just that,” she said. “As stories were shared, I realized that we need to learn each other's stories. We just don’t communicate with one another, and we need to.”

Rev. Joe Connelly expressed the same concern about the real tangible need for true communication to happen inside the church. He challenged the diverse group of pastors. “How many persons of a different race have you invited your home for dinner? Until we are able to look at ourselves and do inward reflection in our actions,” he said, “true change will never begin to happen.” 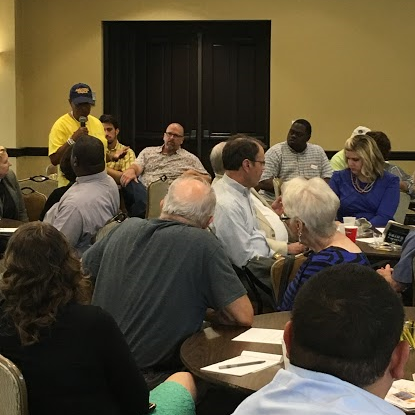 The group remembered their prayer vigil for the shooting death of Alton Sterling just two weeks ago in the North Boulevard Town Square and they began wondering if another gathering in that exact spot was in order.

While plans are underway for the Thursday noon gathering, the entire group is fully aware more action will be needed in the weeks and months ahead.

“Perhaps this is a Kairos moment?,” Rev. Donnie Wilkinson asked the group. “If it is, perhaps we can embrace that our United Methodist church is uniquely positioned and equipped to have the conversation we’ve been avoiding. I’m not a prophet but I can tell you, if we don’t, we will be right back in this room.”

This Thursday, the public is invited to join the pastors at 12 noon in downtown Baton Rouge at the North Boulevard Town Square.

Story by Todd Rossnagel, Director of Communication Strategies for the Louisiana Conference
CONNECT WITH US