A Defining Moment for the 2022 Annual Conference

Mark Lambert
On Wednesday, Desmond “Dez” Dunn felt fortunate just to be in attendance at his third Louisiana Annual Conference of the United Methodist Church after having finished cancer treatment only three weeks earlier.

On Thursday, he started feeling a little uncomfortable, but not because of the cancer he is fighting. Long meetings focusing on the logistical and financial issues surrounding disaffiliation – the separation of congregations from the UMC – left his soul unsettled.

On Friday, after hearing reports from the Anti-Racism Task Force, the conference overwhelmingly approved a resolution to urge the Louisiana Legislature to create a second majority-black Congressional district. But, the vote was not unanimous, and the scattered handful of “no” votes inspired Dunn – a black man –  to address the conference.

What would follow was more than a five-minute speech. It was an emotional amalgamation of three full days of sermons, addresses, and discussion on inclusion and anti-racism combined with protracted meetings, legislation, and voting about disaffiliation.

Dunn, a 36-year-old high school physical education teacher, sparked an impromptu demonstration of love on the floor of the Raising Cane’s River Center and inspired Bishop Cynthia Fierro Harvey to characterize Dunn’s remarks as “the most theologically, scripturally-driven, spirit-led comment that maybe we have uttered these entire three days. 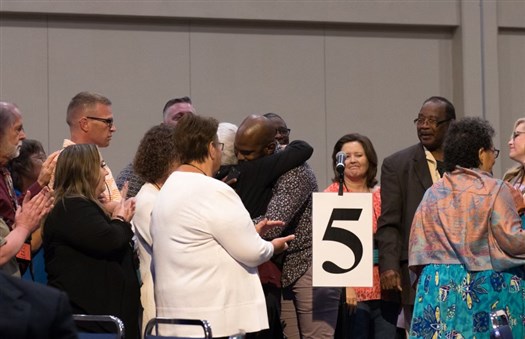 “I just saw my brothers and sisters in Christ raise their red cards (vote ‘no’) against me,” Dunn said, his words cracking with emotion. He backed away from the microphone to find his voice. One black man, Rev. K.C. Roberson of Camphor Memorial in Baton Rouge, stood with Dunn, patting his shoulder for support.

“It is not well with my soul,” Dunn continued.

Then, another person, a white woman, rose and stood next to Dunn.

Dunn soon was surrounded by more than a dozen delegates – all but two were white – as he spoke his mind.

“I’m not a theologian. I’m not knowledgeable on all things…but what I do know is I’m a Christian. And what I do know is that Jesus did what our church has always done,” he said, his voice rising. “The underground railroad…wouldn’t have been as effective as it was had it not been for United Methodists!”

As more people approached Dunn, he wrapped up his impromptu remarks:

“Our church is not dead. We are not dying. It is alive. God is alive. We are alive.”

In an interview after his speech, Dunn said something began stirring inside him on Thursday, during discussions of financial settlements of churches that plan to leave the UMC.

“We weren’t talking about the people, what makes the church,” Dunn said. “They kept talking around the issue. I felt bullied.”

When the vote to recommend the second black Congressional district drew a handful of red cards, “that made me lift out of my chair,” he said. “It was definitely triggering.”

The result was a clear voice that articulated what many at the 2022 Annual Conference were feeling – sorrow over the divisions within the church, pride in the church’s history of social activism, and hope that Christ’s love will inspire greater accomplishments in the future.