The students of the Lydia Patterson Institute in El Paso know what it means to face challenges—and to overcome them.

Students of the school, a majority of whom live in Juarez, Mexico, leave their homes on week days as early as 4 a.m. to travel to “La Lydia,” as the school is affectionately known. They cross the bridge at the Mexico/United States border, and when they arrive at the United Methodist bilingual institution of learning, scholarship students often work for an hour on the chores they  have been assigned. “In exchange for tuition, these amazing kids perform kitchen chores or assist with mowing and keeping school grounds neat. Many of those same youth don’t leave campus until around 7 or 8 if they participate in sports or after school activities. Then they begin their journey back across the bridge,” said the Rev. Tom Garmon, vice president of Religious Affairs and chaplain for the Lydia Patterson Institute.

A group of students from La Lydia traveled to Louisiana this week to muck out several homes that had taken on water during historic floods in August. Despite the personal hardships they face, these young people were “shocked” and deeply saddened to see the devastation caused by recent flooding in the aptly nicknamed “The Bayou State.”

Felixhy Dominguez, a senior at the Lydia Patterson Institute, said she “couldn’t believe” the total loss she observed when the team arrived at their first work site. “As we were driving there, we saw so much furniture--everything that people owned in huge piles out in front of their homes. I kept thinking, ‘This is somebody’s home. Someone was living here.’ They had a normal life, but in just two days, they lost everything they had.”

The work team from Lydia Patterson made the decision to come to Louisiana while completing an intercessory prayer unit offered through the school’s spiritual formation program. “We were in Lay Ministry class, and talking about how so many people in Louisiana had lost their houses in the floods. And then we talked about how the people in Louisiana have helped our school so much in the past. We all agreed that we should return the favor and come here to help,” said La Lydia senior Rebeca Dominguez, after a hard day of mucking out a mold-filled house in a hazmat suit. 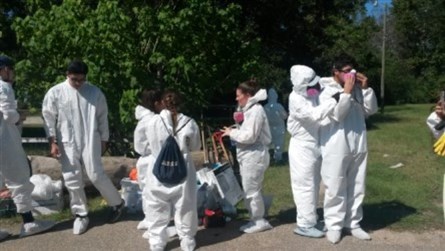 The elderly owner of the Livingston Parish home for which hazmat gear was used told the team from Lydia Patterson that she had received no help since the floods hit and destroyed her home. “There was so much mold that the kids had to wear Tyvek suits, respirators, goggles and even shoe covers to do the hard work of mucking the woman’s home. We pulled up carpet, pulled down walls and carried all of her belongings out of the house,” said Rev. Garmon, who added that the grateful homeowner bought pizza for the kids for their lunch.

The owner of the first home worked on by the team also expressed her thankfulness to the youth. “Even though she was going through hard times, she was really nice and she was still smiling. It impresses me how she was dealing with this,” said Rebecca, who added that the woman brought Krispy Kreme donuts to thank the hard working teens.

“God is there when we need help. And somehow, God sent us to help her. How great is it that His path always works,” she said. “I’m thankful that everything just fell into place for us to come here. Even my parents agreed!” 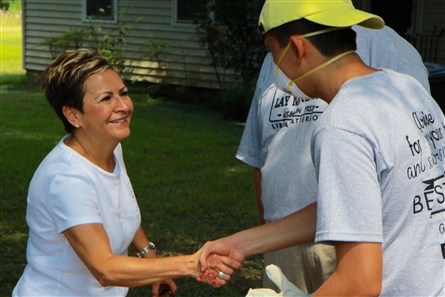 Bishop Cynthia Fierro Harvey, Episcopal leader for the Louisiana Conference, spent time with the students at their third work site.  “So, when they decided to make the 17- hour trip to give back to the people of Louisiana in an expression of thanksgiving for the support they have received, the story of extraordinary young people—most who are Mexican citizens—is  told once again,” said Bishop Harvey. “One student on the trip is enrolled in dual credit courses as she receives college credit from a local college in El Paso. After working hard on a site all day mucking out a house, and before retiring for the night, she took an online exam and scored in the high 90's. These students are smart and are no strangers to sacrifice for their education. And as many of these high school seniors begin to look ahead to college and their future, they were still willing to give up a week of school and give back to a community in need.”

Coming to Louisiana from what is essentially a desert environment was a big change for the students, said Rev. Garmon. “In El Paso, we see about seven inches of rain per year. The only time these kids have seen this kind of water and the damage it can produce is on television. They have all been so impacted by the images of a family’s entire belongings piled up on the street to be discarded. And it is clear to all of us that many of the homeowners, even with flood insurance, couldn’t rebuild without the help of labor from teams like ours.”

Garmon had high praise for the youth, who worked like “Energizer bunnies.” “These kids are just tremendous. They take nothing for granted and they are highly motivated. And this experience has shown them that none of us are immune from disaster. It doesn’t matter how much money you make or what kind of home you live in, when disaster strikes, we all need help.” 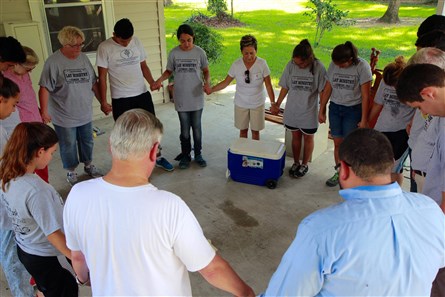 He is most impressed by their passion for making the trip to Louisiana and their desire to “pay it forward.” “Their response tells me that Lydia Patterson isn’t just a school; it’s a community. These kids are so tightly knit. They love each other, and they love those around them. They probably have the softest hearts I’ve ever seen.”

Alondra Vizcarra, senior, perhaps summed up the group’s experience best by saying, “It was wonderful with everybody working together. Even though we were tearing apart people’s homes, we were helping them to recapture their lives—and to start new ones. Maybe the greatest gift we gave was to give them some hope that everything will get better.”

To find out more about the Lydia Patterson Institute, link  to www.lydiapattersoninstitute.org

The students and staff not only brought hands and muscle for the work in Louisiana, they also graciously donated over $1,000 to the relief efforts. You can do the same by visiting our web site: www.la-umc.org

Enjoy this video, produced by Todd Rossnagel, detailing the response work done by the Lydia Patterson students. Rossnagel is the Director of Communications Strategies for the Louisiana Conference.

Story by Betty Backstrom, Communication Liaison for the Louisiana Conference
CONNECT WITH US