Melissa Enis, youth director for Grace Community United Methodist in Shreveport, could hardly believe her eyes when she saw images of the historic flooding in South Louisiana.

“I had just sold my house in Central to move up to Shreveport. When I saw pictures of my old street sign, it was barely visible,” said Enis, who had recently served as youth director for Blackwater UMC in the southern part of the Louisiana Annual Conference.

Blackwater, located in the hard-hit Baker/Central area northeast of Baton Rouge, took on flood waters in some of its church buildings. The sanctuary and Fellowship Hall were spared, but close to 80 percent of Blackwater’s congregation experienced flooding.

“I knew that we just had to gather a team and come down to help. Conversations among the pastors of Grace Community and Summer Grove in Shreveport along with Love Chapel in Haughton and Asbury in Bossier started to happen. Quickly, a large group of youth from all four churches with a group of adults gathered together and headed south,” said Enis, who led the team of 53 response volunteers on Labor Day Weekend.

The strength of the Louisiana Conference connection played out in this trip in some compelling ways. Not only did four United Methodist congregations band together to serve those devastated by August rains and flooding, a conference institution came to the rescue when the North Louisiana team began searching for places to stay while they were in the Baton Rouge area.

“There was a shortage of housing, and we needed a place with showers. Fortunately, Camp Istrouma, located just outside of the city, opened some of their dormitories for our group,” said Enis, grateful for the shelter provided by the Louisiana Conference campground.

Over the Labor Day weekend, the group worked on seven different houses that had flooded. “It was really sweet to see some of the youth from Blackwater UMC as they reached out to the youth on our team. The kids brought popsicles to the work sites and ice cream out to Camp Istrouma. But they usually couldn’t stay with us because so many of the Blackwater kids were still helping to muck out their own homes,” said Enis, who added that Blackwater’s current youth director had taken on six feet of flood water in her home.

“It was so hard on me to see the flooding in my former home in Central. That’s why it felt so good to come down with the kids to help with the recovery,” said Enis, who had also been connecting with some of the Blackwater youth right after the flooding occurred. “During the two weeks when we were in the process of planning the mission, some of the kids traveled up to Shreveport to help me prepare for the trip. You see, at that time, those kids hadn’t started their semester because school buildings were damaged. And the Shreveport kids were already in school, so they weren’t available to assist. They were a big help to me, and it was beneficial for the kids to get out of town for a few days to get a change of scenery.”

The Methodist Connection is impressive, said Enis. “Honestly, my car could break down anywhere in the state of Louisiana, and with a few phone calls, I could catch a ride from a Methodist!”

Working with the homeowners in the flood ravaged houses was a life-changing experience for the youth serving on the response team. One 76-year-old woman, “Miss” Theresa, had a particularly strong impact, said Enis. 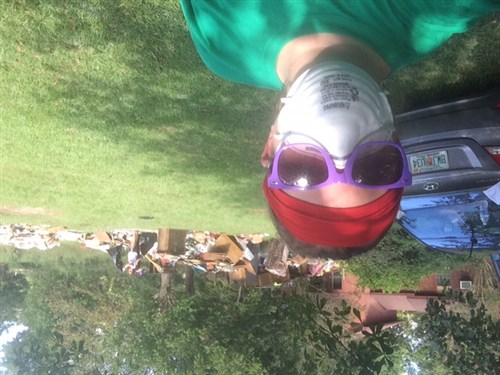 “Theresa’s home had to be ripped out to the ceiling because it took on seven and a half feet of water. This incredibly strong woman never stopped, working side by side with our team. And all that with a broken wrist,” said Enis, who explained that Theresa sustained the injury when jumping into a rescue boat from the second story of her deluged home. Enis is shown, above, masked for gutting the dwelling

“Miss” Theresa’s urgency to finish repairs and return to her home may have had something to do with the fact that she is the caretaker of her daughter, who is a quadriplegic. “She was without a doubt one of the toughest, strongest people I’ve ever met. When the kids would get tired from working, they would look over at Theresa and agree that they couldn’t stop. ‘She’s still going!,’ they would say,” said Enis.

The response team was repeatedly impressed by the positive attitudes of the homeowners, said Enis. “Several folks said that the first tears they shed during their ordeal were tears of joy from watching all of the folks arrive to help in their time of need.”

The experience of seeing so much devastation gave the youth from the North Louisiana churches a different perspective on volunteer work and on what is truly important. “Many of them expressed feelings of guilt for having to return home after the weekend. One youth said, ‘I feel sad . I can leave it all behind, but they can’t.”

Story by Betty Backstrom, Communication Liaison for the the Louisiana Conference
CONNECT WITH US