When the flood waters began to rise in his Watson home just over a week ago, Justin Hutchinson, a member of First United Methodist Church in Baton Rouge, realized he was in trouble and that he needed to evacuate his home. His plan was to drive to safety in his car, but the water was rising so fast, Justin knew that the vehicle wouldn’t make it and that he would have to escape on foot from his house.

The high school football coach and single dad prepared quickly to leave his flooding home, which is bookended by two canals. Fortunately, Justin’s children Audrey and Jackson were safe because they were not at home at the time.

So Justin found a large duffle bag and loaded it up with some personal things, and the family pets—two small dogs. As Justin struggled to walk through rushing water, he worried that he might not make it to safety with the heavy bag. Then one of several miracles happened—a boat came by and took Justin away from the flooded neighborhood to dry land.

Last Tuesday, a team from First UMC went to Justin’s home to help him begin the arduous process of gutting his home, which took on four feet of water. “I was visiting a number of our members who had experienced flood damage, and I went by Justin’s home to offer some pastoral care. Sort of a ‘good will’ tour,” said the Rev. Brady Whitton, pastor of First UMC.

Caroline Tyler, communications director for the church, happened to be with Whitton that day as he made the rounds to various members’ flooded homes. As she was walking through Justin’s house, a second miracle happened—Caroline stumbled across Audrey’s water-soaked American Girl doll. This may not seem so miraculous, but Caroline instantly recognized the clothes on the doll as an outfit designed by her mother, Margaret Tyler, a member of First UMC. As it turns out, Margaret Tyler creates a line of American Girl doll clothes. When Caroline saw the now ruined toy, she announced to Justin, “Audrey will get a new doll!”

Audrey’s brother, Jackson, also lost his toys in the flood. “These houses have been saturated with the filthiest water you can imagine. So salvaging toys that children play with every day isn’t a good option,” said Whitton. Justin told his pastor that Jackson is a big fan of LEGOs, and that of course, all of his blocks were lost.

That’s when a third miracle happened. The next day, a shipment of donated items from the Minden, La. area arrived at First UMC. “State Senator Robert Adley and his wife Claudia had orchestrated the shipment of items, which just happened to include toys. Among those toys were three brand new boxes of LEGOs,” said Whitton. 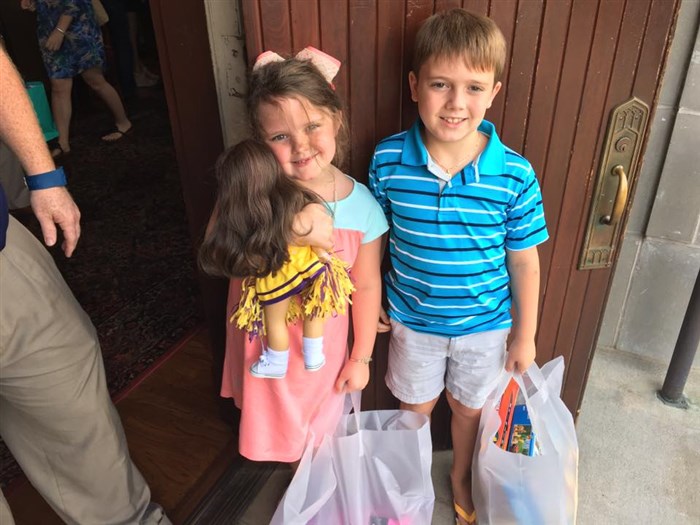 During worship services held at First UMC this Sunday, Audrey was presented with her brand new doll, wearing beautifully made clothes (courtesy of the Tylers). Jackson was given some of the LEGOs that arrived in the shipment from Minden just days before. “Audrey grabbed her new doll and wouldn’t let go! When we explained to the congregation all that had happened to the Hutchinsons, everyone was in tears. It was a moment of badly needed happiness and joy after a week of such widespread sadness,” said Whitton, adding that Justin not only lost his car in the flood, but like so many others, has no flood insurance on his home because he does not live in a flood plain.

Despite those grim facts, Justin is fortunate that he has a large, supportive family living nearby. They have been working side by side with Justin, helping him to restore his home, said Whitton. “The church has been sending out teams to flooded areas for over a week now. We are finding that if folks can just get help with getting the ball rolling on demolition, it’s a tremendous help. Flood survivors are often numb and kind of paralyzed, not knowing where to start. With the help of his family, Justin now has his home gutted down to the studs and is on his way to restoring his home.”

In a show of gratitude, Justin posted this comment on First UMC’s Facebook page, saying, “As I was standing outside my ‘house’ (haha) earlier today looking at my life out on the street, I honestly can say that I felt the hands of God wrapped firmly around me. The fingers of his hands are the people who have surrounded me and my family with generosity, time, sweat, tears, gifts, thoughts, prayers, etc. There are literally too many of you to thank here, but I will take that time individually over the rest of my life because I owe each and every one of you. Thank you for being the hands, feet, and heart of God throughout these last few days. God bless you all!”

Story by Betty Backstrom, Communication Liaison for the Louisiana Conference