The South Central Jurisdiction elected three new bishops during its quadrennial conference, which began Wednesday at the Hyatt Hotel in Wichita, Kansas.

Saenz, 55, the connectional ministries and missions vitality center leader for the Rio Texas Conference, was elected on the third ballot Thursday morning by 133 of the 641 votes, comprised of an equal number of clergy and laity, with each delegate voting for three people on each ballot. He was the first of three new bishops to be elected in the jurisdiction. Saenz, pictured above center, is considered to be the key point person to the bishop and the cabinet of the Rio Texas Conference, based in San Antonio, designing and implementing ministries to fulfill the conference’s mission.

Saenz said he didn’t set out to be an episcopal leader, but over the years, people have talked to him about the possibility of putting his gifts to use as a bishop.

“I think of it as drops in a sponge, he said. “The first 100 drops are insignificant but after a while, it gets heavy and saturated. It was the affirmation of many people I’ve been associated with over the years. 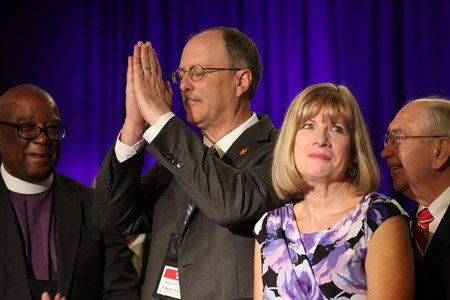 Nunn, 59, the director of mission and administration for the Northwest Texas Conference, was selected on the 21st ballot with 126 of the 418 votes cast by the delegates, equally comprised of clergy and laity. Delegates voted for two candidates on the ballot because two positions remained to be elected at the time.

Nunn, pictured above, has been mission and administration director of the Lubbock, Texas-based conference since 2011, serving for two years prior to that as the Northwest Texas Conference’s director of church development. 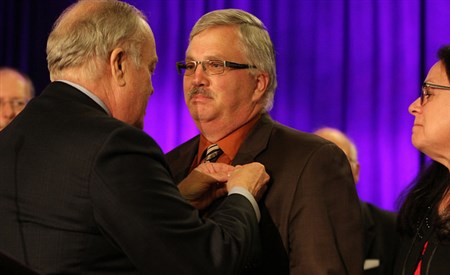 On the South Central Jurisdiction’s record 35th ballot, delegates elected Farr as the third of three bishops chosen during the 2016 conference. Farr, 56, is the director of congregational development for the Missouri Conference. He received 138 of the 212 votes of the delegates, comprised equally of clergy and laity. The Rev. Dr. David Severe, executive director of the jurisdiction, said the previous record for the number of ballots to fill episcopal positions was 30 or 31.

'It was an emotional roller coaster," Farr said of the extended ballots. "It meant a lot to have the support from the conference, the clergy and the laypeople here."

Farr, pictured above, has served as the director of the Center for Congregational Excellence since 2007, guiding 35 church starts and overseeing more than 150 Healthy Church consultations in the Missouri Conference. He also has led 128 individual church consults in 29 conferences across the connection. His most recent local church appointment was at Church of the Shepherd in St. Charles, a St. Louis suburb, where he led the congregation through relocation that contributed to an increase in worship attendance from 450 to 1,200 people.

A consecration service for the new bishops will be conducted at 10:30 a.m. Saturday, July 16, at First United Methodist Church in Wichita. The ceremony can be watched live on the Great Plains Conference’s website at www.greatplainsumc.org/livestream.

Article compiled from contributions by Todd Seifert, director of communications for the Great Plains Conference of The United Methodist Church
CONNECT WITH US