One week ago on July 6, Alton Sterling, a black man, was shot to death by two white police officers in Baton Rouge, La.

Led by Bishop Cynthia Fierro Harvey, United Methodist church leaders immediately came together to collaborate on how they could quickly respond to the tragic incident with a message focusing on peace and justice. The answer was clear, and leaders organized a prayer vigil held at noon last Thursday in the city's Town Square in downtown Baton Rouge.

As the week progressed and response to the deadly shooting generated more and more public protests—largely organized by adults—United Methodist and other youth of the capital city expressed the need to organize their own rally. The Baton Rouge Youth Coalition, established in 2009 to involve underserved children in the community, approached Rev. Joe Connelly, pastor of Wesley United Methodist Church, with the idea of the downtown church serving as a starting and ending point for a seven block youth march to the state capitol.

Rev. Connelly immediately said, “Yes,” knowing that the youth of his own congregation were anxious to be a part of a peaceful protest. “Our voices are not being heard; we have something to say,” they told their pastor. So on Sunday afternoon, the youth gathered at noon in the church’s parking lot. Volunteers provided water and food for the marchers, trying to keeping them comfortable in the oppressive 90+ degree temperatures. 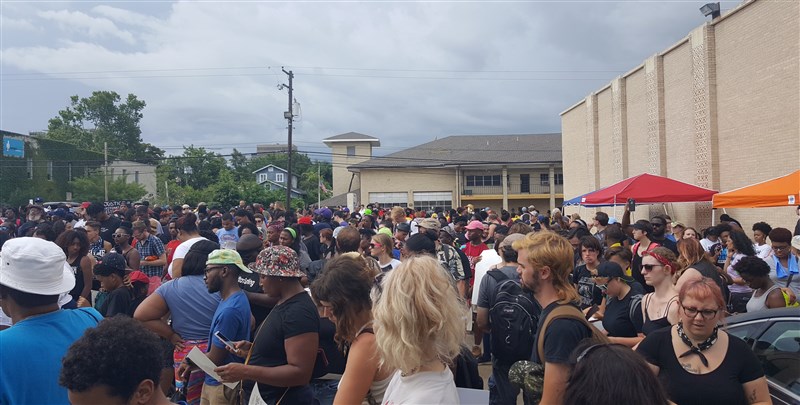 “It was a sight to behold,” said Rev. Connelly. “All ethnicities, a rainbow of youth . . .  there were speeches, poems, chants, banners.” He added that the “overall excitement” at the youth-led march was something that must have been like that experienced during rallies and protests led by Dr. Martin Luther King.

The rally, which was planned with the cooperation of Baton Rouge police, was peaceful up until the time the group returned to the Wesley UMC parking lot. Twenty or 30 minutes after their return, a “rowdier” crowd comprised of adults converged in the church parking lot, said Rev. Connelly. At that time, the youth “were ushered out” and the other group began to march down the middle of Government Street toward Interstate 10. Baton Rouge police began to make arrests in the crowd. “According to records, 41 of the 48 arrests were of non-Louisiana residents,” said Connelly.

Asked if the presence of outside protesters is negative or positive, Connelly said it is both. “For 72 hours, we had protest rallies without one single incident. On Friday afternoon, we started getting arrests when other groups started to come in,” said the Baton Rouge pastor, who believes that “peaceful agitation” is the key to evoking change. As a positive, Connelly believes that “more light is shed” on the subject by the presence of the “outside press.”

“Individuals have a right to protest; we in Baton Rouge are calling for peaceful protest. We have to live here,” said Connelly, who hopes that the city can “live into a new Baton Rouge.”

Connelly believes that the United Methodist Wesleyan heritage is filled with examples of  “social change and witness.” “There will be healing because of God's people. We are Gods hands, God’s feet, God’s eyes, God’s ears,” he said, encouraging others to “reach across the aisle” and begin to “have relationship with those who do not look like us.”

“We now have an open bleeding wound; lets don't let it close up right away” until solutions for peace and justice are discovered, said Connelly.