The team helped to refurbish the fellowship hall of the center, located in Okmulgee, Ok., during their mission which stretched from May 8-12.

“There are several halls which are used by the various tribes for cooking, meals and fellowship during the  annual conference of the Oklahoma Indian Missionary Conference. This year’s event is in June,” said Lord, who indicated that the LAVIM team worked on the hall for the Cherokee tribe. 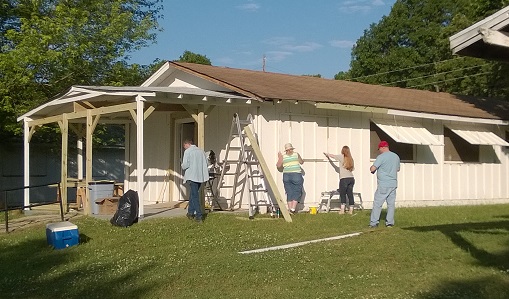 During their annual conference, the various tribes actually camp on the grounds and meet under an outdoor pavilion during the yearly event. “And that’s with no air conditioning,” said  Lord, who added that the outdoor camping is an attempt to keep their meetings historically traditional.

A total of 14 volunteers from United Methodist churches in Louisiana and East Texas (along with a few Baptists for seasoning!) served on the mission to Oklahoma. Churches included First UMC in Arcadia, Mt. Mariah UMC and First UMCs in Haynesville and Homer. Volunteers also represented the Cross Bayou Emmaus community, which pulls from the Shreveport District. “We had so many talented folks on the team—good carpenters!,” said Lord.

“I also want to thank Gloria Spybuck and Rev. Anna Stilwell for being such kind and gracious hosts. They are from the Cherokee church in Talequah, Oklahoma,” he added.

As a footnote, Lord said that the group was able to reconnect with missionary colleagues from Lord’s years in Tanzania. Baptist missionaries Ralph and Vivian Boyle, who have retired in nearby Beggs, Oklahoma, joined the LAVIM team one evening for supper. “It’s a small world after all!,” said Lord.
CONNECT WITH US