Louisiana Avenue United Methodist Church is impacting the city of Lafayette through an active “street” ministry. Appropriately, the outreach program is known as IMPACT, an acronym for “inspiring ministry of poverty action through Christ’s testimony.”

The ministry began as a “brown bag” feeding program for the growing population of homeless in downtown Lafayette, said Rev. Robert Johnson, pastor of Louisiana Avenue UMC. Every month on the second Saturday, church members prepare and pack sandwiches with chips and water, praying over the bags of food before they head “to the streets” to distribute the lunches.  “We recently served 162 people on the streets of Lafayette. We could have helped more, but we ran out of food,” Johnson added.

The energetic and community-minded pastor is thankful for the church volunteers who make IMPACT possible and who are “willing to go where Jesus would go.” The momentum behind the ministry’s initial success has seeded the addition of clothing distribution and pop-up worship throughout the community to its offerings.

Hitched to the back of a truck, a colorful trailer which bears the ministry’s IMPACT logo carries needed supplies as volunteers make their way around the city. “It’s good to be part of a connectional denomination,” said Johnson, who shared that Rosedale UMC gifted IMPACT with the sound equipment needed to hold street worship. “Through this ministry, we are taking church out of the building and meeting people at the point of their needs. That is where Jesus meets us all.”

Two of the largest groups of the city’s homeless citizens can be found near the Lafayette bus station and off of St. John Street, according to Johnson. “These groups are setting up camp areas under trees and in the woods. They need physical help. And they want a church to come out and minister to them. They want prayer and they want to tell their stories.”

One man served by the church’s IMPACT “brown bag” ministry shared with Johnson that he never could have imagined that he would ever be homeless and living on the streets. Then three years ago, the man lost his job, his home and his family in rapid succession. “He shared with me that at one time he was very angry with God. But he added that because of ministries like IMPACT, and our willingness to just listen to his story, he knows there is a God who loves him and who will not leave him.” 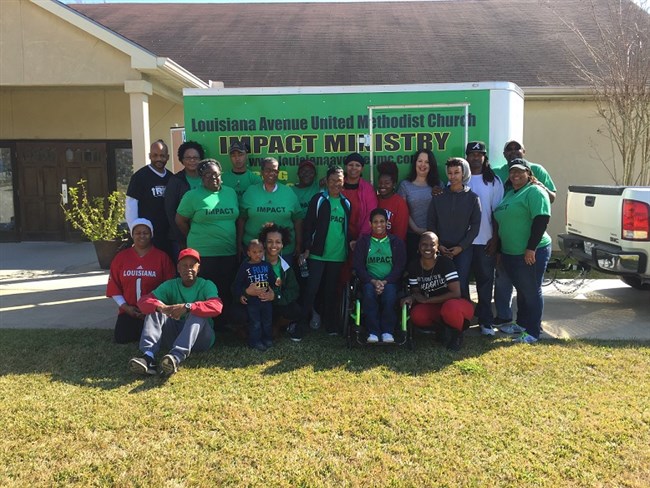 When greeting the homeless, the 30-plus volunteers from Louisiana Avenue UMC wear brightly colored t-shirts bearing the IMPACT logo. “They know us now and are beginning to trust us. As groups, they have built their own communities and look out for one another. When we offer food, they take only what they can eat so that all can be fed. When we go out on Saturdays, we regularly check on one area house that usually has at least 10 people in the home–in addition to the adults, there are very young children and teens in this home, living with no food.”
Seeing such great need continues to inspire church volunteers, said Johnson. “The people that we are serving want to go to church, but they have felt that the church won’t accept them. But, yet so many of them love the Lord.”

So, Louisiana Avenue UMC continues to develop new ways to bring church to the people. Rev. Johnson said, “We as a faith community want to live out the Gospel. Jesus said, ‘If a man has a hundred sheep and one of them gets lost, what will he do? Won’t he leave the ninety-nine others in the wilderness and go to search for the one that is lost until he finds it?’(Luke 15:4 NLT) Through Impact Ministry, we are searching for that one lost sheep.”
CONNECT WITH US