When Rev. Ted Freeland was traveling south on Louisiana Hwy. 165 in North Monroe through flooding rains last week, he began to get that sinking feeling that he could be in trouble. The pastor of Faith and Wilhite United Methodist Churches in West Monroe recalled that he could see that water was covering the road. “ I hit the water, stopped and looked carefully. At that point I couldn’t see the road. I decided I wouldn’t continue on, but I saw other  cars trying to go through,” said Freeland. “So I eased into the water in my Altima, which is pretty low to the ground. But all I could see was 400 yards of muddy water. When I finally decided to back out, I looked behind me and saw a line of cars on my bumper, waiting on me to lead them through! Trucks were getting through, so I gave it the gas, and immediately lost traction. I couldn’t find the road and all I saw was muddy water and  no landmarks. I began to drift in the car, and felt a moment of panic,” said Freeland.

From that point, everything happened quickly. He managed to grab his cell phone, open the car door and began to swim. “I don’t remember touching bottom. All of a sudden, I spotted a man inside his truck stopped on the road. So I began to swim to him. Honestly, I don’t know if he would have seen me if it hadn’t been for my white hair bobbing up and down out of muddy water,” Freeland said with a laugh, adding that the stranger with the truck ultimately got the United Methodist pastor safely home. “I really believe that God was watching over me. When I saw the guy with his truck, I had seen no one before I abandoned the car,” said Freeland, who said the most frightening moment came when he was in the water and looked back to see the tail lights of his car disappear as the vehicle went under the water.

When Freeland preached at Wilhite UMC the next Sunday, he was amused to find child-size floaties, an inner tube, swimming goggles and nose clamps left for him on the pulpit. “I put them on and we all had a chance to have a laugh about what had happened.”

Rev. Valerie Robideaux, director of Professional Discernment and chaplain for Centenary College in Shreveport, was watching the evening news on March 8 when it was announced that Bossier Parish schools would be closed the next day. “We were experiencing heavy rain, but honestly, we didn’t have a concept of what was about to happen,” said Robideaux, who told her children to go back to bed to “get some more sleep” when they woke up Wednesday morning.

The young family quickly realized that “things were getting bad” that Wednesday. Valerie drove to her sister’s house, and as she approached the lakeside home, the United Methodist pastor could see in her rear view mirror that she was being followed on the flooded road by a KSLA-TV camera crew. “It was at that moment I realized that I shouldn’t be driving through this!,” said Valerie.

Shortly after arriving at her sister’s home, they heard a knock on the door. The local sheriff was there to announce that the area was under a mandatory evacuation. “So we packed up everybody and went back to my house, only to discover my neighborhood was also under mandatory evacuation. My parents, who live on Cross Lake, were also in trouble. They knew to get out, but with every family home in jeopardy, we had nowhere to go,” she said, adding that the entire family found rooms that night at a Hampton Inn. Ultimately, Centenary College contacted Valerie to let her know that the resident life coordinator had made two suites available for her family in the James Annex World House for Social Justice dormitory.

Robideaux, who is a graduate of Centenary, will be retiring from her position with the college in a few months. “When I was a freshman, I actually roomed in the James Annex dorm. I find it ironic that my last semester at Centenary, I actually slept in the same dorm I stayed in during my first semester as student.” 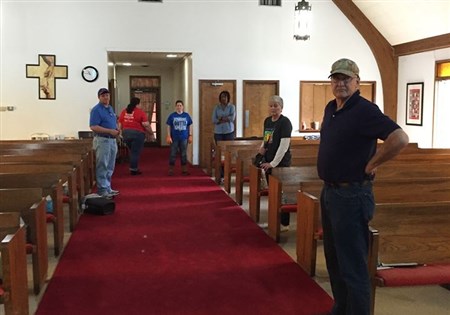 Rev. Marcelle Crow serves as the pastor of Reveille UMC in Sterlington, one of several Louisiana Conference churches that sustained flood damage. During a phone interview with Crow, the United Methodist pastor was helping church volunteers from Reveille and St. Paul’s UMC in Monroe pass out health kits and cleaning buckets provided by the United Methodist Committee on Relief Sager Brown Depot.

“Reveille UMC received major flood damage. The water has receded and we are now throwing things away,” said Crow, who is hopeful that the congregation will be able to use another United Methodist church building that is not currently being used.

In the midst of tragedy, when everything looks bleak, reversals can miraculously happen. “I am watching God move this whole scenario. We are a poor church, and the potential gift of a building gives us access to a facility that can meet our current needs,” said Crow.