Lucas Prestenback, a member of Bayou Blue United Methodist Church in Houma and a student at Vandebilt Catholic High School, was given an assignment to complete in his eighth grade honors English class. The task was known as the “20 percent Project,” basically because the students were to spend 20 percent of their time in class working on the assignment.

In determining what the project should focus on, Lucas thought about his two “passions.”  “I tried and tried to combine my love of performing with a humanitarian action, but I could not. But I realized that I had another passion—eating.” So Lucas decided that he wanted to feed the homeless.

Many of his classmates sold products and donated the money to a charity, but Lucas wanted to personally feed the hungry. “So I told my dad about my project, and he gave me the idea of asking our church for help,” he explained. 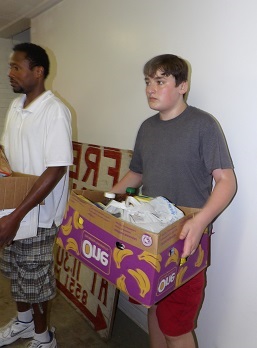 Lucas attended a board meeting at Bayou Blue UMC and pitched the idea of the mission team helping with the feeding project. With the help of the board, it was decided that Lucas and church volunteers would offer assistance to House of Hope, a local faith-based food distribution center. The project would entail bringing lunch on two separate days to be distributed to those in need.

Lucas and his United Methodist volunteer team agreed to pack to-go bag lunches that would be given to people after they ate a hot lunch is the House of Hope cafeteria. Church members gathered each time, setting up an assembly line in Bayou Blue UMC’s choir room. “We put into the bags an evangelism card, a bottle of water, information on our church’s time and place of worship, a bag of potato chips, a New Testament bible, a napkin, condiments and a hamburger,” said Lucas, who added that the group decided to send hot dogs for the second distribution because “it was one big mess dealing with the hamburgers!”

Bayou Blue UMC’s  “Lunches of Love” ministry reflects the “vision and preferred future” of the Louisiana Annual Conference of The United Methodist Church by effectively “engaging with the local community.”
On both trips to House of Hope, the team gave away all of the bags. In all, 180 “Lunches of Love” were distributed.  “On the second trip, we gave a bag to a little boy and he said, ‘Thank you! I love you!’ Those words meant so much to us and made everything all worthwhile,” said Lucas.

Keying in on the “Lunches of Love” project name took a little bit of time for Lucas. “In the beginning, I decided to call it ‘Hopeful Hamburgers’ because it sounds decent, and I was originally just going to give out hamburgers. But my church would call it ‘Project Lucas’ whenever they referred to it in the bulletins and during announcements. When we decided to switch to hot dogs, I thought that ‘Lunches of Love’ would be a better name for the project. ‘Hopeful Hamburgers’ was a good title before we started, but hope is something you believe before it happens. Once the project started, the hope was replaced by love,” said Lucas.

In presenting a paper to his class about “Lunches of Love,” Lucas referenced the following scripture: “So faith, hope, love abide, these three; but the greatest of these is love (1 Corinthians 13:13).”

Bayou Blue UMC is keeping open their newly established ties with House of Hope. And Lucas? Well, Lucas is considering attending seminary and a possible career in church ministry. 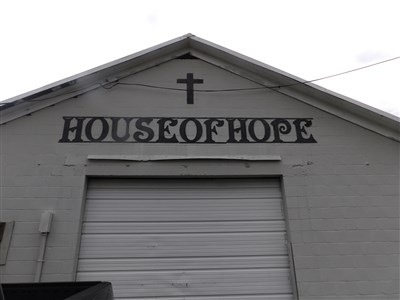