Fred Neal, a member of Neely United Methodist Church in Baton Rouge, was featured in the Summer edition of BASF Geismar’s Louisiana Pipeline, the company’s employee and retiree magazine.

A retired chemical engineer, Neal has been serving as a Kids Hope USA mentor at Polk Elementary School in Baton Rouge. “When I retired from BASF, I considered being a substitute science teacher. But I’ve found that mentoring is also a positive way to influence young people,” said Neal.

When BASF Geismar Retiree Fred Neal's children were growing up, he and his wife took an interest in their school activities and made a proactive effort to meet their children’s teachers and principals. His children are now adults and have graduated to the working world, but Fred continues to stay involved with area schools. In his role as a mentor to young students, Fred brings the same enthusiasm and involvement to his mentees as he did with his own children.

"Mentors can make a difference by being positive role models and helping give young people direction in life," he said. "Mentoring keeps me active and engaged with kids, and it makes my life worthwhile and meaningful."

Fred, a chemical engineer, retired in 2008 after a 28-year career with BASF. Shortly thereafter, he learned about the Kids Hope USA mentoring program. Through his involvement with Neely United Methodist Church in Baton Rouge, Fred became involved with the national, nonprofit organization that promotes mentoring of at-risk children through church-school partnerships.

Fred volunteers as a mentor at Polk Elementary School in Baton Rouge. Throughout the school year, he spends an hour a week with a third to fifth-grade mentee. He prepares for his role by first conferring with his mentee’s teachers. By learning what subjects his student needs assistance with, he is able to plan relevant activities and lessons during their time together.

Applicants for the Kids Hope USA mentoring program must pass a screening and selection process conducted by principals, teachers and guidance counselors before he or she is matched with a student, and all mentoring activities take place on school grounds. 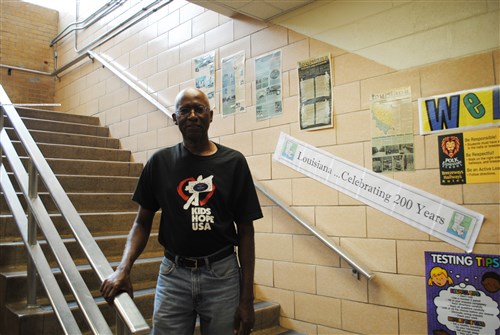 Fred noted that students selected for the program often come from single-parent families, and many benefit from the guidance and attention they receive through these mentoring relationships.

"My time with a student creates opportunities to discuss their futures," Fred said. "We talk about careers that interest them, and I tell them about the work I did as an engineer at BASF."

Fred also invites his mentees to participate in activities sponsored by the men's group at his church, including annual trips to see New Orleans Pelicans basketball games.

"When I retired from BASF, I considered being a substitute science teacher," he said. "But I've found that mentoring is also a positive way to influence young people."

In his role as a mentor, Fred teaches his students so much more than just the right answers.