Sadie McGuire, a member of First United Methodist Church in Shreveport and a senior at Magnet High School, spent her spring break this year in Costa Rica as part of a mission team with other members of her youth group.

Laboring in the middle of the jungle, the work was “exhausting but rewarding.” “We left sore but satisfied,” Sadie wrote in this article about her life-changing experiences

Last summer I went with the First UMC Youth Group to help build the future headquarters of Costa Rica Mission Projects in San Isidro, Costa Rica. We were helping to construct a compound with cabins for future missionaries, rooms for young girls wanting to go to college but having no place to stay, and a day care for single moms who weren’t able to work because they couldn’t afford child care. In the middle of the jungle with only a few other structures built, we began to dig holes that would become the foundation of the combination kitchen, dining pavilion, and store shed. The work was exhausting but rewarding. We left sore but satisfied.

This spring break—almost a year later—I was able to return to Costa Rica. An indescribable feeling overwhelmed me as I entered the gate. Cabins stood where jungle had been before, and concrete sidewalks replaced cleared trails and dirt steps. But what struck me the most was the two-story dining pavilion. “We laid the foundations for this,” I thought, and I was amazed at all that had been accomplished in the months since my last visit. But as I worked that week (coincidentally digging holes for the foundations of a different building), I thought not so much of the amount of the work that had been done, but the people who had done it. We were all children of God doing work in His name so that His message could be passed on to the beautiful and joyful people of Costa Rica: each missionary doing a small part, whether it be digging the foundation holes or putting on the roof, to build that huge complex. 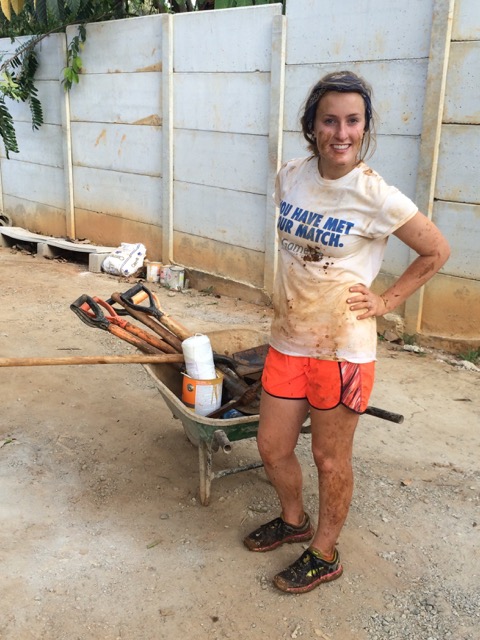 It reminded me of when we lay our hands on people to pray over them: the group showing their presence and care in a small way that has a big effect. Each of us “laid our hands” on Costa Rica by contributing what we could. This trip made me realized that missions are an extremely powerful way to grow closer to God by building relationships (and sometimes buildings) with the people around you for a common purpose. All of the people on the trip, whether a native Costa Rican, or from FUMC or our partner group from South Carolina, became extremely close, but I also felt a connection to the unknown people before and after us who come with the same goal and same love of the Lord. Multiple times that week an intense peace washed over me with a feeling of wholeheartedly belonging there, sweating and serving with fellow brothers and sisters in Christ.

I fully intend to return to Costa Rica, and am considering pursuing a career in missions because of that incredible peace and sense of needing to be there. Anyone wishing to grow in their relationship with God should consider a mission trip, whether local or international as a way to broaden your horizons and share the love of God in your heart.

Sadie McGuire is a senior at Magnet High School in Shreveport, Louisiana.
Communications and News