An active homeless ministry, a community-wide march for unity and an interfaith prayer and communion service for more than 3,000 people are just a few of the ministries through which Louisiana Avenue United Methodist Church is impacting the city of Lafayette.

The church’s “brown bag” ministry helps to feed the growing population of homeless in downtown Lafayette, said Rev. Robert Johnson, pastor of Louisiana Avenue UMC. Every month on the second Saturday, church members prepare and pack sandwiches with chips and water, praying over the bags of food before they head “to the streets” to distribute the lunches.

Two of the largest groups of the city’s homeless citizens can be found near the Lafayette bus station and off of St. John Street, according to Johnson. “These groups are setting up camp areas under trees and in the woods. They need physical help. And they want a church to come out and minister to them. They want prayer and they want to tell their stories.”

One man served by the church’s IMPACT “brown bag” ministry shared with Johnson that he never could have imagined that he would ever be homeless and living on the streets. Then three years ago, the man lost his job, his home and his family in rapid succession. “He shared with me that at one time he was very angry with God. But he added that because of ministries like IMPACT, and our willingness to just listen to his story, he knows there is a God who loves him and who will not leave him.”

When greeting the homeless, the 30-plus volunteers from Louisiana Avenue UMC wear brightly colored t-shirts bearing the acronym IMPACT, which stands for “inspiring ministry of poverty action through Christ’s testimony.” “They know us now and are beginning to trust us. As groups, they have built their own communities and look out for one another. When we offer food, they take only what they can eat so that all can be fed. When we go out on Saturdays, we regularly check on one area house that usually has at least 10 people in the home—in addition to the adults, there are very young children and teens in this home, living with no food.”

Seeing such great need continues to inspire church volunteers, said Johnson. “The people that we are serving want to go to church, but they have felt that the church won’t accept them. So many of them love the Lord.” 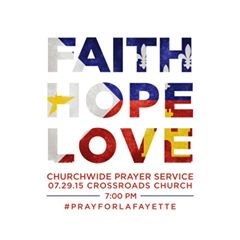 As part of Louisiana Avenue UMC’s outreach efforts, Rev. Johnson served on the planning team for an interfaith community-wide prayer service held on the evening of July 29. More than 35 clergy came together to plan and host the service on the heels of the July 23 shooting in a Lafayette movie theater which resulted in three deaths, including that of the shooter. The service was held at Crossroads Church, a congregation of the Assembly of God tradition.

Johnson recalled the events of July 23, sharing that he and his wife Tammy happened to be eating dinner at a restaurant located across the street from the Grand 16 movie theater where the shootings took place. “A woman came into the restaurant and told us that 10 people had been shot. The next day, I got a phone call to participate in a meeting of 35 clergy who were planning a community prayer service that would help bring the city together in prayer and healing. There were more than 3,000 people at the standing room only service where we cried, prayed and shared communion as a group.” 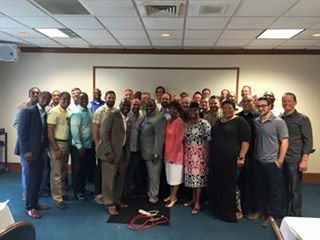 Johnson was moved to see the group of clergy come together so quickly to serve the hurting people of Lafayette. “We had more than 50 pastors at the service, as well as two rabbis and a Roman Catholic priest. Although Wednesday nights are typically worship nights for many churches, all of those services were cancelled to assure that those members would be in attendance for the citywide service. Within a week, this event came together proving that despite denomination, despite socioeconomic background and despite race, we can walk together.”
“Tragedy, darkness and evil only remind us that nothing is impossible for our God. This event showed us that prayer still works and that everything works together for good to them that love God. Lafayette is still strong,” said Johnson

In yet another effort to show support for the community, Rev. Johnson and members of the Louisiana Avenue congregation participated in an Aug. 1 citywide march for unity. More than 1,000 people participated in the two-mile walk which began at the city’s Martin Luther King Center and ended with personal testimonies and presentations from motivational speakers. “The march brought the community together where we joined to speak out against violence in our neighborhoods and recent tragic shootings. Once again, people of every race, denomination and political persuasion came together for a common cause.”

The Unity for the Community march has begun! #LafayetteStrong #Unity

During one of the planning meetings for the walk, a young woman spoke out against the heavy influence of Christian groups in crafting the event. “Everybody doesn’t believe in God,” she said.

One of my church members told me that she was offended by the young woman’s statement. “I told that member that something has happened in that person’s life. She’s one of those people that we’ve gotta’ go find and hear her story. We can’t say that we’re not going to deal with her. She is the one that needs God’s love,” said Johnson.

Johnson frequently challenges his congregation to think about the question, “Who is my neighbor?” “In truth, everyone is our neighbor. I want to look out in our congregation and see people of all socioeconomic backgrounds and races. I pray that Louisiana Avenue UMC will grow more and more every day to look a little more like heaven.”

Perhaps one of his greatest challenges to his congregation is to constantly remind them that they “have to leave the church building to be the church.” “I don’t pastor a church, I pastor a community. I’m a brother to  anyone I meet. Who is my neighbor? Everyone is my neighbor,” said Johnson.
CONNECT WITH US