It's hard to say no to cheese grits. Especially when they're served hot, with smiles — and free.

Last Sunday morning starting at 8:30, the smiles began at the double door of the fellowship hall across the street from Louisiana Memorial United Methodist Church.

"Good morning — come right on in!" boomed Billy Miller, a senior member of one of Opelousas' oldest churches. He held open a door with one hand and gripped his cane in the other.

A woman arrived on a bicycle laden with her possessions and locked it to a nearby fence. A man with an scholar's vocabulary and a restless curiosity crossed the street to sample for the first time what his neighbors called "a tremendous breakfast."

For an hour and a half every Sunday since February, volunteers from the church have cooked and served that kind of breakfast to all comers free of charge.

Although cards on every table let visitors know that Sunday school meets at 9:30 and worship begins at 10:30, church members insist they don't make breakfast only to recruit new members.

Teri Cober, who coordinates the five teams that take turns shopping, cooking, serving and cleaning up each week, said, "we want to reinvigorate our attitude toward loving our neighbors.

"Food is our love language," she said.

It helps that the church owns an air-conditioned fellowship hall with room to seat 200 people at round tables. There's a restaurant-grade kitchen with a five-burner gas stove, two double ovens, two dishwashers, multiple sinks and refrigerators and a commercial ice maker. 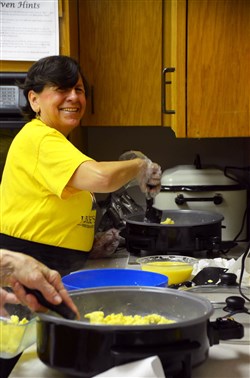 Louisiana Memorial is no megachurch — attendance on an average Sunday is about 75 people. But many of its members like to cook, and 100 quickly signed up to join the five breakfast teams.

At the most recent meal, diners helped themselves to coffee, tea, milk, orange juice and cold cereal arranged buffet-style on a long table. One week, somebody from the church baked cinnamon rolls from scratch. This time, kitchen helpers offered plates of scrambled eggs and sausage patties, hot biscuits and, of course, those grits.

"Boy, the cheese grits were a big hit," Cober recalled in the church fellowship hall, quiet on an afternoon between Sunday breakfasts.

"The first week we had 'em, a lot of people came back for seconds and thirds," volunteer Lois McDaniel said.

A lot of people have come back for multiple Sundays, too. Most live within walking distance of the century-old sanctuary at Bellevue and Lombard Streets.

When Wilton Woods first saw yard signs around town for the free breakfasts, he was on his way to another church for Mass. For that he goes to Holy Ghost Catholic Church, where he also routinely visits for the free hot lunches it serves three days a week. Other congregations supply him with boxes of groceries to help stretch his military pension.

His friend Wesley Le Blanc joined him for breakfast, wearing a sport jacket and tie and clutching a Bible. He said he's brought several people to Wesley's Table but had never, until this fifth visit, recognized a sweetly obvious connection.

"That's my name," he realized as he made his way to his table.

Woods said he also felt as if he belonged. "When you come to the door it's real friendly. It's not about color. It keeps me going on and on."

The act of serving may have a similar effect on the oldest Methodist congregation west of the Mississippi River, established in 1806.

Most of its members are white and most breakfast guests are black.

The pastor, the Rev. Stephen Fife, said, "This church had to make a decision about who we are going to be."

"The congregation," he added, "said, 'We want to engage with our neighbors.'"

Last Sunday those neighbors included Joyce Brown and her five children, who stopped at the fellowship hall for the fifth straight week.

Beaming at her neatly dressed family around the table, she said, "believe me, they wake up in the morning ready for this."

Brown said she also enjoys the weekly ritual because "it's getting people together.

"Last week I saw a good friend of mine I hadn't seen in years," she said. Others testified to similar encounters.

McDaniel, who taught English and reading in St. Landry Parish public high schools until she retired, said she's seen and reconnected with some former
students at breakfast.

People in the congregation have also gotten to know one another in new ways, she said. Before the project launched, some of them had worried that their church had neither the wealth nor the will to keep it going. "Now, they're the ones in the kitchen cooking," McDaniel said.

So far, the congregation has not run out of money or food for Wesley's Table, even as the number of visitors has grown each Sunday.

There's been a bump in church attendance, Fife said. "People are more alive as far as the worship service goes. I hear a lot more hope-filled conversations."

He added that members of other congregations have called him to ask in wonderment, "What's going on over there?"

Church leaders admit they don't know how long it can go on. At first they'd planned on operating Wesley's Table through late May. They'll decide soon whether to continue the project past then.

Until 9:50 last Sunday, people showed up in twos and threes at the kitchen counter. Methodists in the mix exchanged greetings and small talk, and
sometimes shared a table, with their visitors.

Jeannette Silverand and her 4-year-old daughter Nyla were among the last people served. "The food is good," the mother said. "It's a blessing that they have this for the community."

She balanced two plates wrapped in foil to walk home. The lively little girl reached for plastic cups of orange juice and milk and followed her out the door.

By 10:20, the breakfast team had wiped down the counter tops and tables, taken out the trash, cleaned the restrooms, mopped the floors and packed up the leftover food for transport to the Lighthouse Mission, a men's shelter.

McDaniel made sure to flip the final light switch, set the alarm and lock the double doors of the fellowship hall before she bustled across the street to worship.

On those doors, below the word "Welcome," is this:

"May all who enter as guests leave as friends."

Printed with permission from Cheryl Devall
CONNECT WITH US