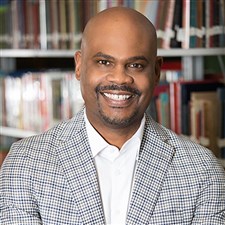 A nationally recognized leader, speaker, and author on evangelism and church revitalization, the Rev. Junius B. Dotson is the General Secretary (chief executive officer) of Discipleship Ministries, an international agency of The United Methodist Church with a staff of 135. Dotson launched “See All The People”, the highly successful church-wide initiative that helps church leaders concentrate on intentional discipleship, while learning new behaviors around engaging their surrounding community.

Rev. Dotson is the author of Developing an Intentional Discipleship System: A Guide for Congregations, and Engaging Your Community: A Guide to Seeing All the People. Both resources help congregations look beyond their walls, acknowledging that God calls us to have “meaningful relationships in authentic, organic and consistent ways.”

As a leader who responds to challenges and opportunities in new and creative ways, Rev. Dotson believes that effective ministry is about training, developing, and empowering leaders to establish ministries that address the needs of the whole person – body, mind, and spirit.

His current 90-second daily radio series, “See All The People”, is featured on more than 40 stations across the U.S. His ministry has been featured in The Tennessean, The San Jose Mercury News, The San Francisco Examiner, The Sacramento Bee, The Wichita Eagle, religious journals and segments on CBS Radio’s “The Osgood File,” as well as on ABC, NBC and CBS affiliates in San Francisco, San Jose and Wichita.

Prior to his present position, Rev. Dotson was Senior Pastor of Saint Mark United Methodist Church in Wichita, Kansas, where he was instrumental in transforming the 3,500-member church into a multi-campus congregation.

Rev. Dotson received his undergraduate degree in political science, with a concentration in economics, at the University of Texas at Arlington. While attending UT-Arlington, he was president of the local chapter of Alpha Phi Alpha, the nation’s oldest African-American fraternity. Rev. Dotson began his graduate work at Perkins School of Theology at Southern Methodist University in Dallas, Texas, and earned his Master of Divinity degree from the Pacific School of Religion in Berkeley, California. He was ordained in June 1992.

In 1996, Rev. Dotson responded to the challenge of planting Genesis United Methodist Church, a new and innovative church in the Silicon Valley of California, which grew into a diverse faith community of nearly 500 people.