ST. LOUIS – The Council of Bishops of The United Methodist Church would like to thank the delegates to the Special Session of the General Conference for their diligent work during the 2019 conference, which ended today in St. Louis, in the United States.

The General Conference is the highest legislative body in the church and the only group who can decide church law and speak officially for the global denomination.

The 864 delegates (half lay, half clergy) from all over the world met from Feb. 24-26 to discuss and act on the report of the Commission on a Way Forward over the issue of human sexuality.  The delegates also considered petitions other than the report from the Commission.

The decision of the General Conference was to offer a majority support for the Traditional Plan.  The vote was 438 to 384. The delegates then voted to ask the Judicial Council, the highest court in the denomination, to review the constitutionality of the approved legislation.

What is the Traditional Plan?

The Traditional Plan keeps the current language around sexuality and increases accountability by streamlining the processes to enforce penalties for violations of The Book of Discipline related to marriage and ordination of LGBTQI persons.  Some parts of the Traditional Plan were ruled unconstitutional, and it will take some time to clarify which parts will become part of our church law and which parts will not.

“We continue to teach and believe that all persons are welcomed in the church, all persons are persons of sacred worth and we welcome all to receive the ministry of Jesus.  Human sexuality is a topic on which people of faith have differing views,” said Bishop Ken Carter, president of the Council of Bishops, after the conference ended. “Despite our differences, we will continue to work together to make disciples of Jesus Christ for the transformation of the world and share God’s love with all people.”

What is the next step for the UMC?

Since the legislation is not the official church law until January 1, 2020, the bishops are urging all United Methodists to stay focused on the mission that glorifies God and reaches new people with the gospel.  Bishops will be holding meetings with clergy and laity in their annual conferences on how details will be handled in each area.

Tuesday morning the General Conference convened in plenary session to take up the legislative committee’s recommendations and to hear a report from the Judicial Council pertaining to the constitutionality of the Traditional Plan.

The majority report of the legislative committee recommended the Traditional Plan.

A minority report offered the One Church Plan as a substitute.

After presentation and debate, the delegates voted not to substitute the One Church Plan, and moved to consider the Traditional Plan and all petitions related to it.

The One Church Plan failed to get approval form the legislative committee by a defeating vote of 436-386, 53.04% vs. 46.96%. This does not mean the One Church Plan is completely dead as it could be brought tomorrow to the plenary session as a minority report.

The Traditional Plan — with some amendments — won approval in the General Conference legislative committee, clearing a major hurdle in The United Methodist Church’s top lawmaking body. The delegates also approved two plans that allow churches, with certain limitations, to leave the denomination with their property. All the forwarded legislation still faces a vote in the General Conference plenary session on Feb. 26. READ MORE FROM UMNS 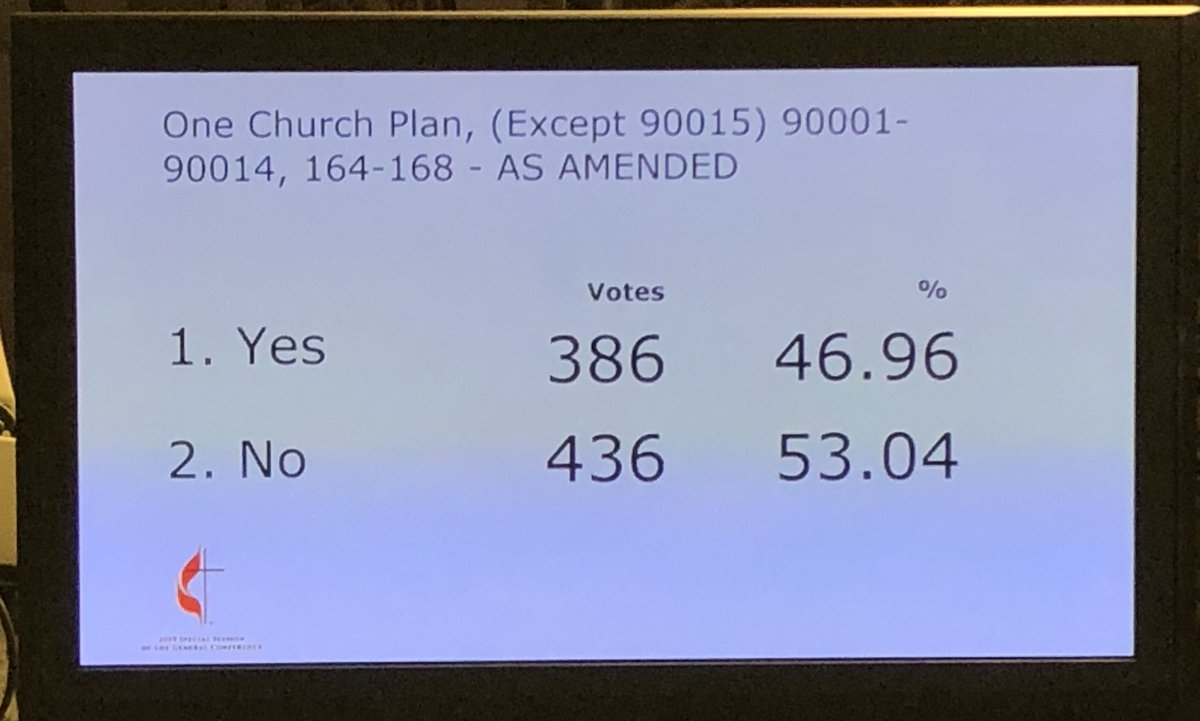 Petitions meant to address pensions and the Traditional Plan topped the list of priorities for what General Conference delegates will work on in their legislative committee.

By 56 votes, the Traditional Plan topped the One Church Plan, supported by a majority of the bishops. READ MORE FROM UMNS

At the morning worship service, Bishop Ken Carter, President of the Council of Bishops, delivered the Sunday message. Text of that sermon can be found here.

Following Bishop Carter's sermon, the Commission on A Way Forward presented the findings of their work, including reports on all three of the plans that resulted from their nearly two years of work.

The delegates are now on lunch break and the afternoon session will resume at 1:00 CST.

Don't forget, if you would like to follow the session LIVE, you can do so by heading to this link.

Late this evening, the Judicial Council ruled petitions related to potential plans unconstitutional by the denomination’s top court. Petition 90052 is unconstitutional, the court said in Decision 1375 “because it infringes upon the right of the annual conference to vote on all matters relating to the character and conference relations of its clergy members,” as provided under Paragraph 33 of the Constitution. READ MORE

As the opening of the 2019 General Conference loomed, a handful of openly gay delegates talked about legislation and more with fellow allies of full inclusion for LGBTQ people in The United Methodist Church. READ MORE

A larger-than-expected crowd turned out for a breakfast meeting hosted by Good News, an unofficial traditionalist advocacy group, on the first day of the special General Conference. READ MORE

Hear from Rev. Andy Goff and Carolyn Dove as they wrap up day one of the Special Session.

The Special Called Session of General Conference has begun in St. Louis, MO.

The Saturday morning session was focused on various prayers with Conferences and delegations from all over the denomination leading the Louisiana delegation and others in prayer for guidance prior to their work.

Just prior to the break for lunch, The United Methodist Judicial Council received a petition for a declaratory decision from the Council of Bishops regarding the constitutionality of two General Conference legislative items, Petitions 90052 and 90078.

Meanwhile, the Louisiana delegation is here with some alternates still on their way after travel delays have impacted arrival.

We hope to hear from some of the delegates later this evening.