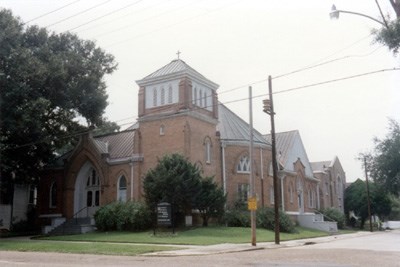 In 1876, river boat captain Hamton Mears wanted to have his children raised as Methodists. He offered local preacher James D. Parker his home as a meeting place. Mr. Parker was from the Rayne Church, which was too far for the children to walk. As the group grew, a larger room on Laurel Street (belonging to Charles Walker) was used for meetings. The group kept moving and growing. Mr. Parker then began asking for money to build a church.

In 1880, land was purchased at Constance and Octavia. The first church was built in 1882 and named Parker Chapel. The offering at the dedication service ($700) was enough to pay off the outstanding debts on the new church. In 1886, Parker Chapel was assigned to Rev. George Mandeville, pastor at the Carrollton Avenue Church. By 1889, there were 169 members. In 1890 two lots were purchased on Jefferson Avenue and Magazine Street. After the chapel was moved to the new location, a tower, vestibule, and classrooms were added. Rev. Franklin N. Parker was the pastor at that time.

After James D. Parker died in 1895, the church was renamed Parker Memorial Methodist Church in his honor in 1897. A parsonage was bought in 1897 at 734 Nashville Avenue.
The cornerstone for the present church was laid in 1904 under the leadership of Rev. K.W. Dodson. It was completed during the pastorate of Rev. Atkinson (1907-1911). The church debt was paid off by 1917. An education building was purchased while Rev. P.M. Caraway served as pastor (1927-28). The old parsonage was sold in 1928, and a new parsonage was purchased on Eleonore Street. Shortly after, the church began installing stained glass windows as memorials.
An adult class begun in 1947, the Lamplighters, has helped with church projects through the years.

In 1955, work began on a new education building.

When the Eighth Street Methodist Church closed down in 1956, its 50 members transferred to Parker.

The dedication of the education building was led by Bishop Aubrey Walton on June 14, 1964.